Autumn for us is like a deep exhale after a summer of heat, a delicious pause before inhaling a new season of hustle and bustle, family and friends, peace and contemplation, or whatever else.  Cat boys really like this season...the crisp weather delivers in metered doses, cool mornings, warmer and warmer daytimes, cool and cooler evenings.  It is the season of games, and who knows more about games than cat boys.

Last Sunday was a typical autumn Sunday for our part of the world...a cool morning where heat was carried by quanta of light that reflected off the air and dust particles, Gussy felt the electricity and so did Ollie from the look of his wild mane.

We three decided to go to the back yard of delights after moseying around here and there, a private location where we step into the pretend kingdom. 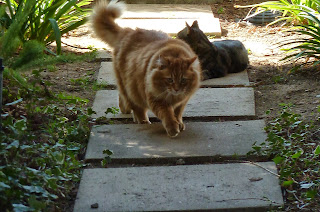 "Let us sit", I said, and that is what they did!
Sure, there was the urge to grab them, wrestle them, and give them kisses on their funny faces, but I had to admire beauty from afar as one admires it in the wild, from afar, no touch. 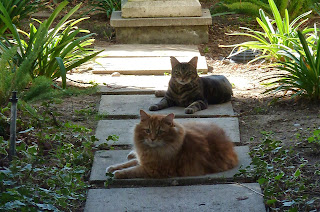 The slender Augustus who was weighed at 15.5 pounds of delicious loveliness was trying to think of something profound while the Big Orange was trying to read Augustus' mind by pointing his ears backwards towards him. 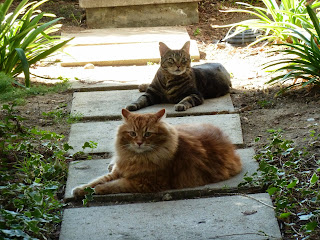 Then they connected by looking at each other but ears pointed back to cover a good distance around them!  Fascinating! 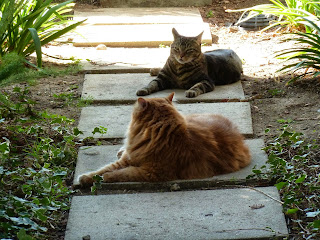 Then they showed me their profiles, the jaguar and the lion...yes, your mommies were jags and lions. 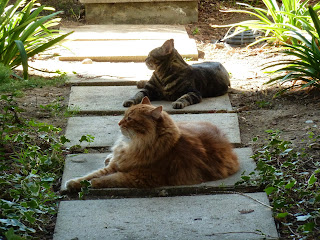 To one who has been long in city pent,'Tis very sweet to look into the fairAnd open face of heaven, - to breathe a prayerFull in the smile of the blue firmament.~John Keats, Sonnet XIV

THAT WAS WHAT WE DID.

Then they looked away from each other, 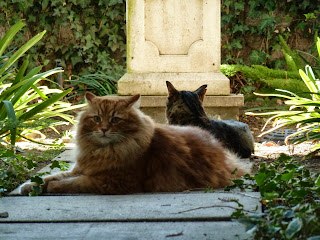 and right back towards me.  I wanted to giggle but did not. 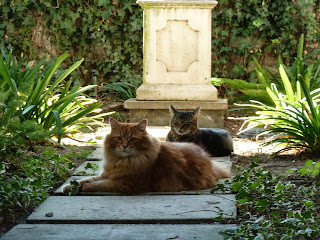 Finally the slankster got up and with stretched strides 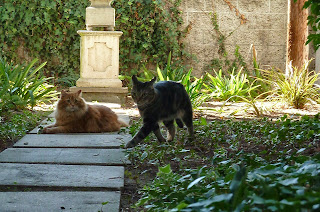 that turned into a hurried gait 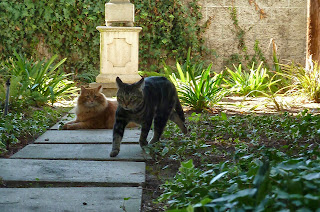 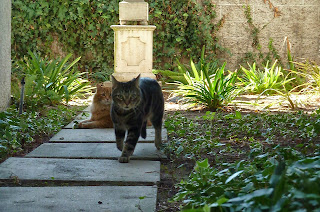 The squirrel was looking from above 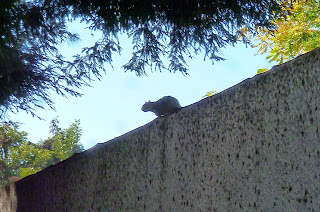 when we were walking back home. 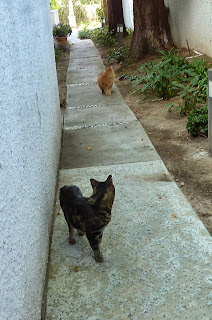 I was thinking about inhaling and exhaling, one can say so much about it both physically and spiritually and emotionally.

Learn how to exhale, the inhale will take care of itself.  ~Carla Melucci Ardito

I frequently need to exhale and I have noticed that cat boys really love exhaling, and they look awfully cute when they do that.

"I can only note that the past is beautiful because one never realises an emotion at the time. It expands later, and thus we don't have complete emotions about the present, only about the past." --Virginia Woolf

Last Sunday morning we had some moments together on the patio.  The sun was shining gently and the little bit of nature that we had around us only tweeted...no loud sounds.

I invited the two Misters to sit on the wall for snacks and story telling while I planned to get busy with some repotting of plants.

I had to get my hands out of the soft dirt within minutes to pick up the camera because the delightful crunchy sounds and scrunchy faces the cat boys were making were too precious to ignore.

Here's Gingerella, so pleased, and so much like a baby tiger, 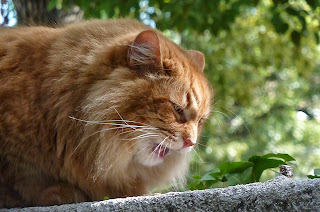 and even more so was Mr Sweet Pants who had laid down his tail on a straight line. 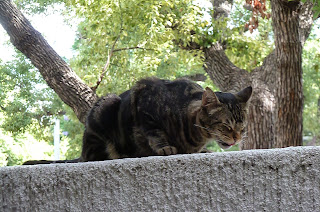 Here are the plants that have since been repotted into different pots. 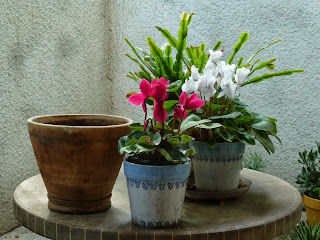 Here are the cat boys after snacks, each finding his private corner for observation and contemplation. 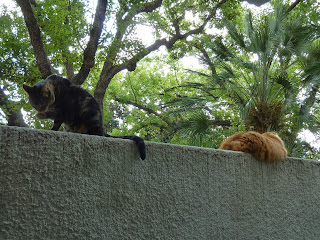 We can never get enough of cyclamen. 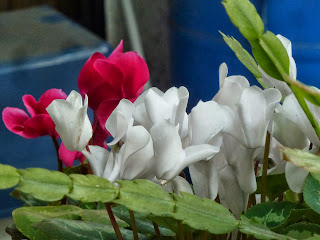 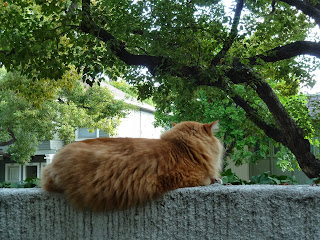 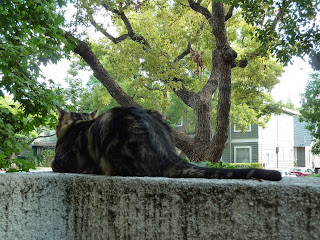 "I can only note that the past is beautiful because one never realises an emotion at the time. It expands later, and thus we don't have complete emotions about the present, only about the past." --Virginia Woolf

A friend sent me the above quote a few days ago and I saved it because so much of it rings true with me, and yet not entirely as I believe that I can appreciate the present moment sometimes quite fully, other times not.  Perhaps this is what Niels Bohr meant when he spoke of the "richness of conscious life".

Are you aware of the state of richness of your life or do you realize it later in time?

Cat boys made many kisses that they blew out in the air for you!  Enjoy!

4 a.m. this morning Gingerella used all of the lines and meows that he had memorized, and I replied to each one, eyes closed, until he jumped on the bed in the way that a lion jumps to get his prey.

I told him in plain English that I was not going to get up until 5, and he listened!!! True, he spent the next hour galloping from corner to corner but at least he had accepted that we were not to go out until 5 a.m.

4 a.m. and 5 a.m. are about the same when one is awake but I try to delay getting out in the dark because a certain slanky cat, Mr Sweet Pants, likes to go out and find an alley cat to fight with. 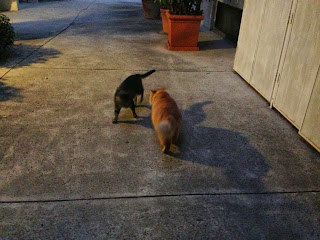 When it got lighter, much lighter, 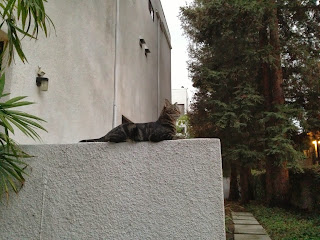 the cat boys came indoors for num nums and I thought it was a good thing to let them stay indoors for the rest of today since I had a busy day ahead.

Here is Mr Sweet Pants after his morning excursions and nums, 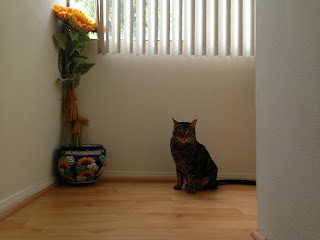 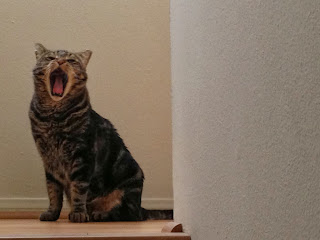 Here he is down on the second floor, relaxing on one his several lounging areas, and watching 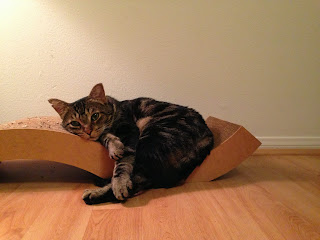 his brother, Mr Puffy Pants, who had fallen on his back.  We did not know if he had been boxing a lot and was pretending that he was knocked out or if he was just plumb relaxed.

(PS-The ladder against the wall is not tacky decor although it feels that way given the number of months it has been there...it is just left over from some work done that I need to finish.) 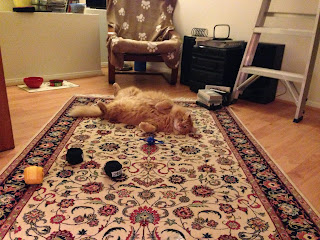 Gazing into his hazel eyes I noticed that sleep was about to come. 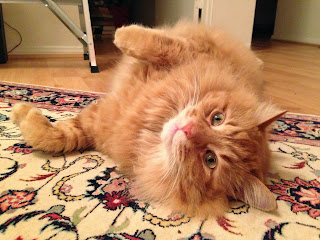 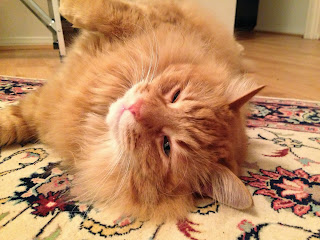 and here are his Puffy Pants.... 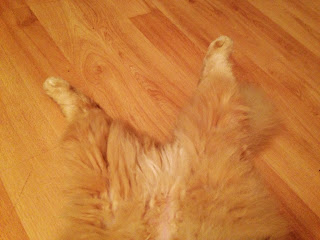 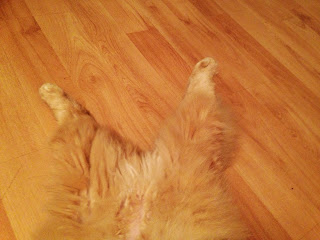 How do you break your dawns?  Do you like dawns?
I find dawn time fascinating as many of us traverse from the sleep world into this one...it is truly a fascinating experience.  I am frequently accompanied by two furry cats, they pull me out of my dreams and I wake up in-between two places!

Cat boys studied this while I was at work, I am sure:

"Now there are many wisdoms to ponder in the dream, which none but the people of this Valley can comprehend in their true elements. First, what is this world, where without eye and ear and hand and tongue a man puts all of these to use? Second, how is it that in the outer world thou seest today the effect of a dream, when thou didst vision it in the world of sleep some ten years past? Consider the difference between these two worlds and the mysteries which they conceal, that thou mayest attain to divine confirmations and heavenly discoveries and enter the regions of holiness.
…
All these states are to be witnessed in the Valley of Wonderment, and the traveler at every moment seeketh for more, and is not wearied. Thus the Lord of the First and the Last in setting forth the grades of contemplation, and expressing wonderment hath said: "O Lord, increase my astonishment at Thee!" ..."(Seven Valleys)

Cat boys sent you best wishes for a happy weekend and promised to send you pawfuls of kisses.