september 29th, backyard with the catboys....

September came to a rapid close this year, or is it the same each year?
Sunday morning I decided that I did not have new pictures of the cat boys this week so I walked towards the back of the complex hoping that some furry creatures would follow me.

The stretched out one, followed me like a jaguar, and I was happy to see him high on that wall. 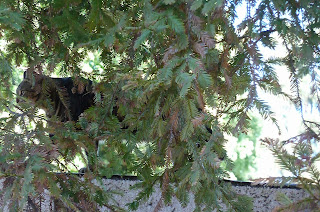 Rapidly he scaled down the white stucco surface, 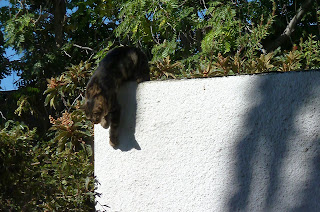 so quietly that I did not even hear the usual thump. I was looking at his shadow wondering if it would confuse him, that shadow that closely followed him on the wall.  Gingerella, who was down at my feet, was looking intently. He did not know if it was one or were there two cats coming towards us. 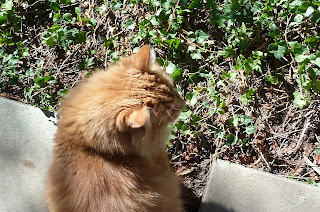 They kissed as the French do, one side 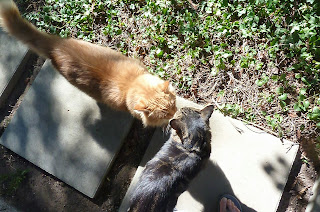 and then the other! 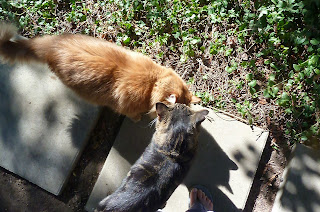 I thought it would be good to get them to sit and reflect a bit; in fact, thinking about it this could be why they have been a bit on the wild side lately. 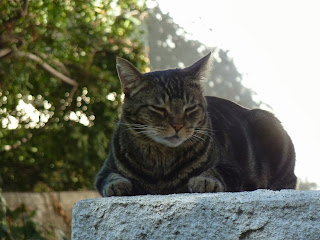 while the orange one ran to the dirt and rolled on his back.  Less surprised I could not be. 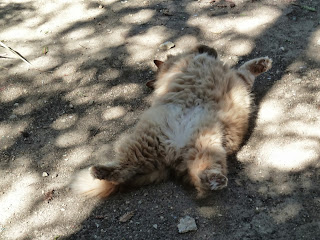 I asked him to try again 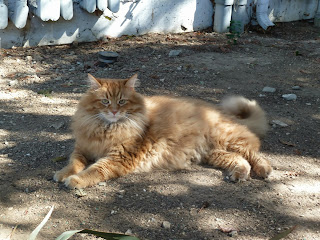 while Augustus closed his eyes 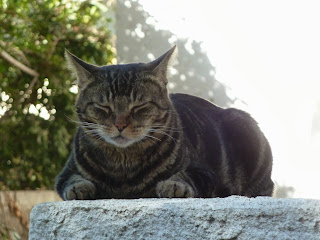 and finally, I had two rascals, who had assumed a good posture of reflecting. 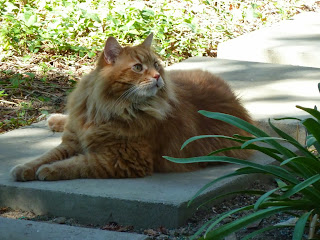 We reflected on this:

O Son of Existence!
Remember Me in My earth that I may remember thee in My Heaven.
Thus may our eyes delight therein.
(The Hidden Words)

I had been thinking the other day about what things/places I remembered or not and why, and instantly felt a little sad that some places did not leave an impression on me.

Cat boys wished you a happy beginning to October.  They sent you pawfuls of kisses with little purrs.
Posted by MrsLittleJeans at 2:32 PM 11 comments:

it means fall is arriving.  When the heat of days get interrupted with cool bursts, that too for us is a sign of fall's arrival.  When light particles land lightly on the earth instead of beating down with force, that counts as fall too.  There is also the magical change in colors, which is caused by a host of seemingly unimportant factors, changes in amount of light, changes in acidity, quite a marvel indeed...

Well, fall was in the air that morning last weekend even though it did not look it.  We three had gone for a stroll in the morning. The surroundings were quiet, only little sounds of nature could be heard, truly an oddity for being in a big city in a condominium complex.

Cat boys were doing their thing, which consisted mostly of listening, sniffing, and observing.  I also think that they spend a great deal of time plotting but disguise it with their cuteness.
I was mostly observing them and the surrounding but felt rather unfocused, a frequent experience after being intensely busy for a long while.

Ollie was sitting like a Gingerella, perky, plump and pretty.  I could not read his mind but his face told me that he had a lot of mischievous plots arranged in a certain order in his head. 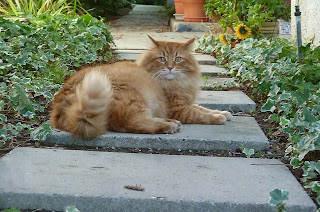 Augustus, the Sweet Pants, had sighted something on the wall and had the 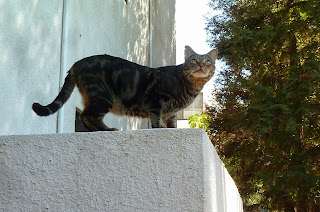 urge to investigate.  His springiness made me snickle. 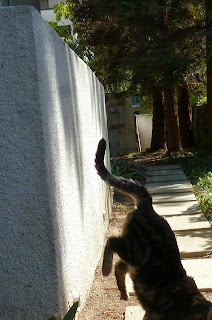 His jump startled Gingerella who instantaneously showed his Vulcan ears.  Certainly, this has to be a clever Vulcan cat but in fact he is not because he has many emotional outbursts, and we know that Vulcans are in control of their emotions. 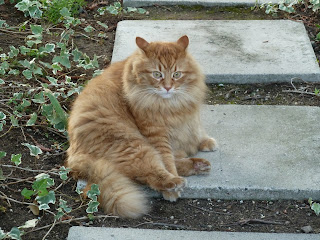 The neighbor's geranium was particularly red, and miraculously has been the same size all summer (it is not fake), 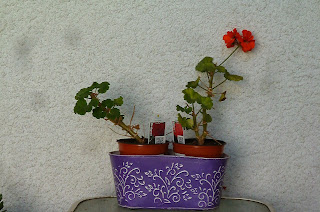 and these leaves were particularly purple. 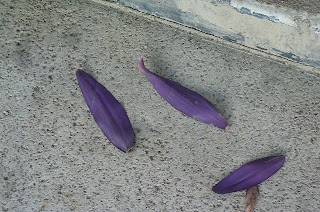 When colors intensify....so do our emotions and and mental acuity.  This really is a state and a season to enjoy and embrace.

I asked the red one to choose a reading for reflection and he chose this:


I like this quote because it states a certain truth that is mostly unrealized.  On the other hand, I suspect that Ollie bringing this to my attention means that he wants to be served platters of tuna morning and night, and I am not falling for that no matter how much I become acquainted with myself.

Cat boys sent you pawfuls of kisses with deep meaning.  Enjoy everyone!

the moments that count....

Ollie, whom shall be called Blondie today, reminded me that our last blog post was a month ago! 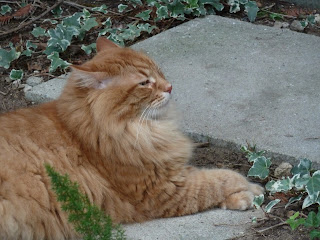 Augustus, whom shall be known as the Stripey today, was somewhat astonished at his brother's ability to keep time!
I too shared his astonishment but in an expected way. 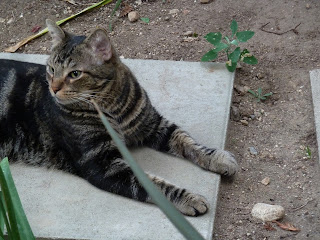 We have been here and there, the cat boys usually accompany me to soften the rough edges of each day and show me the softer moment within each moment.

In the patio one weekend in August Stripey indicated that he had his eyes on Blondie. 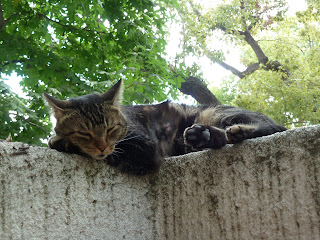 Blondie meanwhile wondered how he could escape that gaze unnoticed.  Actually, this happens to be one of his daily goals. 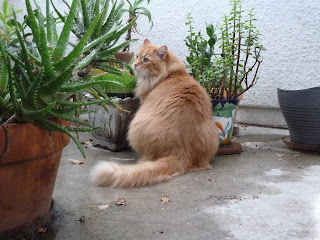 I marveled at their wisdome...mostly Augustus' 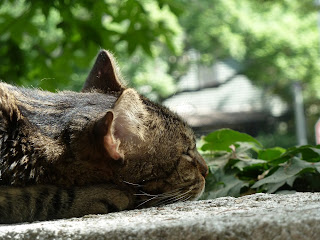 because during most conversations Blondie keeps busy playing, this time on my lap, 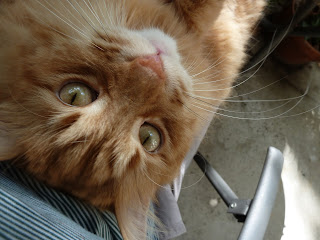 in that carefree way only cat boys are familiar with. 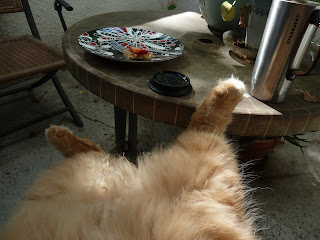 We were surrounded by waves of light 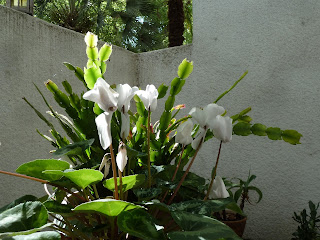 that shone through us all. 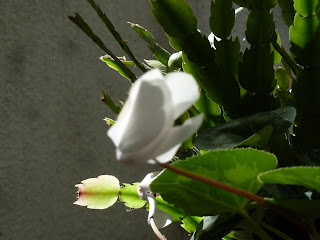 The post would be way too long if we included one month's worth of reflections..so we let it go.  But that last day on the patio we thought about this: