I am not a cat whisperer I have come to find out...

I am not even sure how to begin this post it has been so long, or so it seems. I think I only managed to take a cursory look at a few posts twice this week, we all felt deprived of the company of our friends we have gotten so used to seeing and saying hi to.

It is good to be busy...moving...alive...challenged...flexing and adapting...doing and thinking. And on this gorgeous day I am not going to suggest that one should balance things.  Let them remain unbalanced because surely they will balance eventually.

I have not been playing cat paparazzi much these days because doodle 1 and doodle 2 have been unmanageable. I am so glad I did not quit my job for that position of lion handler in the circus. Let's face it I was considering myself a cat whisperer and that I am not. When I know something it is usually because one of the two fur balls has spelled it out for me, now I find this.

On that particular afternoon I was trying to round up the cats by the neighbor's front door because she wanted a picture of the boys to send to her friends in England.  I called Mr Puffy Pants but did not share with him that this would be a photo shoot. 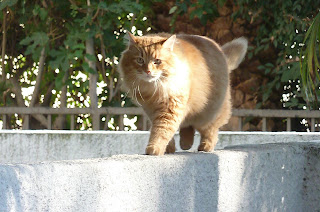 His round body took little ballerina steps towards me 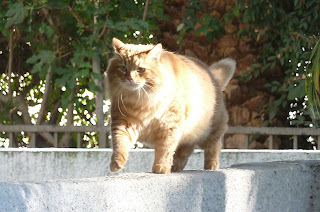 and down the side of the wall 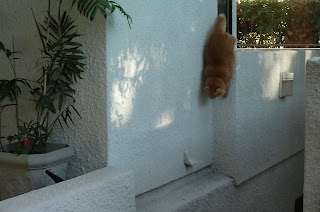 and with a hop he landed on the 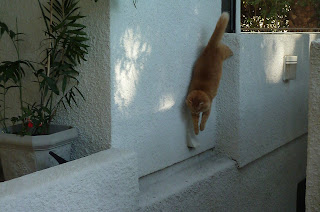 ledge, never making a sound that a human could hear 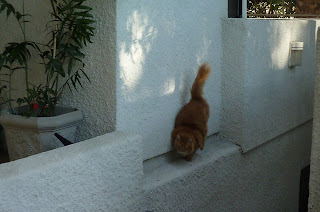 only a sound that another superior CAT could hear.  Mr Sweet Pants turned around with that 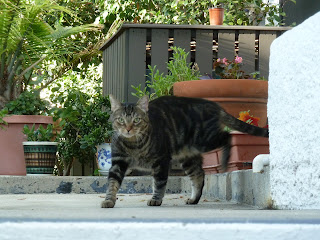 sort of a look that was uninterpretable to me. 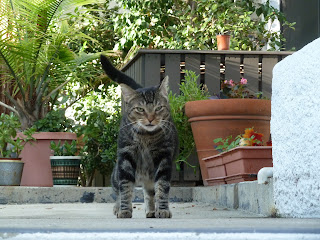 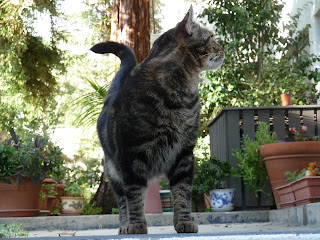 Then the other one looked. 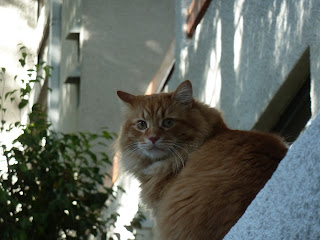 Then Mr Sweet Pants burst into singing out loudly, something neither of us expected. 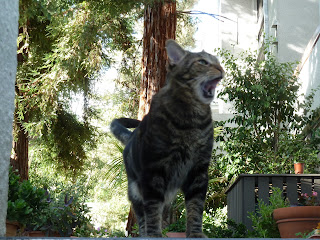 I finally called the meeting asking them to assume the posture of listening but having not specified which way to gaze I got their backs, and those backs to me are as adorable as the fronts 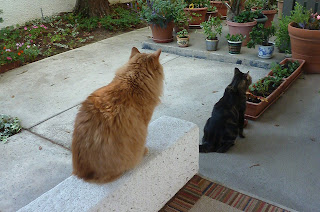 "Say: Naught is seen in My temple but the Temple of God, and in My beauty but His Beauty, and in My being but His Being, and in My self but His Self, and in My movement but His Movement, and in My acquiescence but His Acquiescence, and in My pen but His Pen, the Mighty, the All-Praised. There hath not been in My soul but the Truth, and in Myself naught could be seen but God." (The Summons of the Lord of Hosts)

Cat boys enjoyed the reading and reflected on it while sniffing plants. They sent you happy weekend wishes and many many kisses. 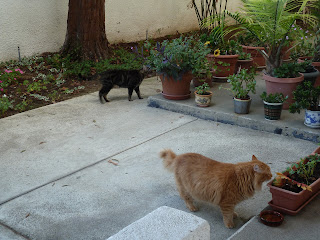 Ciao everyone!
Posted by MrsLittleJeans at 12:50 PM