meant a little bit of repose for the kitty parents. Don't get me wrong, furry boys still ran out, they could not believe their eyes ... they thought that we had moved the bathroom showers outside, and were a bit angry with me at first. In and out, in and out, they ran with their wet little paws!
Kitty mom took advantage of this downpour...drove out 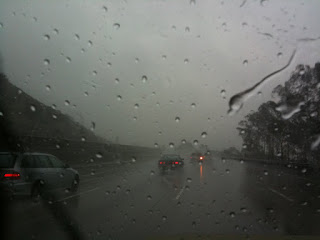 to a mall to meet up a friend and do some shopping. 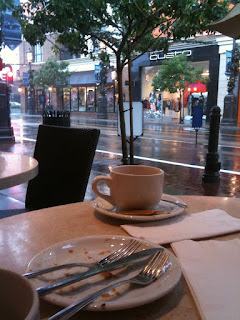 Clearing skies the next day...all fresh air and fresh colors...real beauty showing its face here and there: 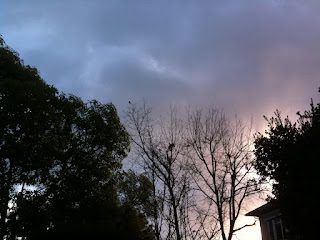 a fallen branch of palm 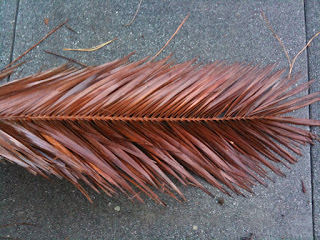 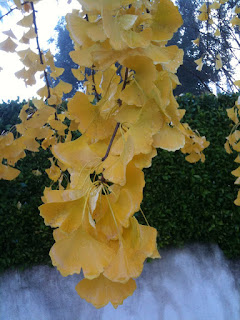 orangeish leaves on the tree 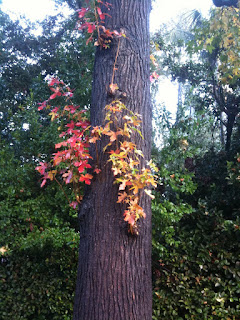 and down below in the pool of water 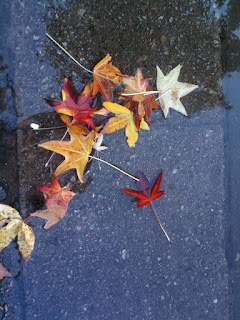 and in the surrounding grass skirt. 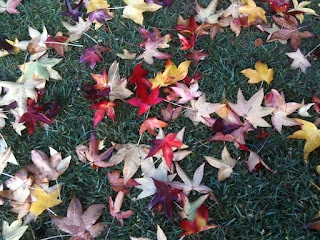 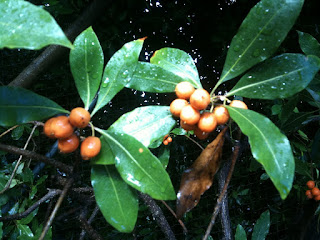 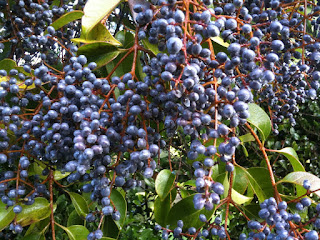 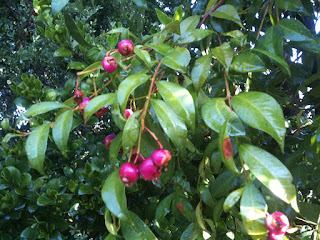 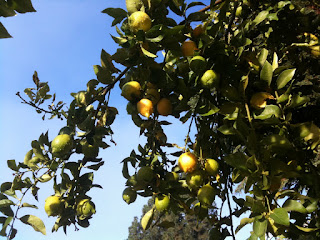 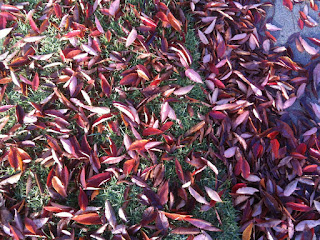 and an orange Ollie by his salad bowl! 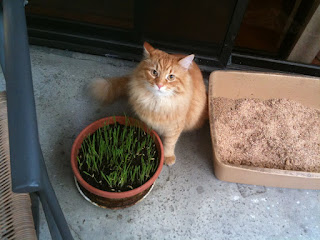 Gussy checking out the street, 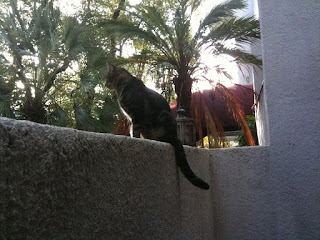 and finally dos rascals ready to resume their daily routine! 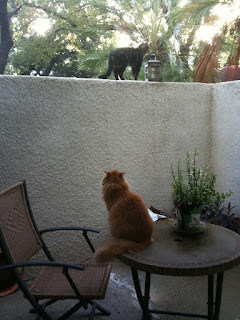 Having examined so many leaves and branches in my early morning walk I felt the cat boys would benefit from a reading that spoke to nature and its various forms since they too would be going on their own field trips soon.
...Furthermore, the forms and organisms of phenomenal being and existence in each of the kingdoms of the universe are myriad and numberless. The vegetable plane or kingdom, for instance, has its infinite variety of types and material structures of plant life -- each distinct and different within itself, no two exactly alike in composition and detail -- for there are no repetitions in nature, and the augmentative virtue cannot be confined to any given image or shape. Each leaf has its own particular identity -- so to speak, its own individuality as a leaf.
Therefore, each atom of the innumerable elemental atoms, during its ceaseless motion through the kingdoms of existence as a constituent of organic composition, not only becomes imbued with the powers and virtues of the kingdoms it traverses but also reflects the attributes and qualities of the forms and organisms of those kingdoms.
As each of these forms has its individual and particular virtue, therefore, each elemental atom of the universe has the opportunity of expressing an infinite variety of those individual virtues. No atom is bereft or deprived of this opportunity or right of expression. Nor can it be said of any given atom that it is denied equal opportunities with other atoms; nay, all are privileged to possess the virtues existent in these kingdoms and to reflect the attributes of their organisms.
In the various transformations or passages from kingdom to kingdom the virtues expressed by the atoms in each degree are peculiar to that degree. For example, in the world of the mineral the atom does not express the vegetable form and organism, and when through the process of transmutation it assumes the virtues of the vegetable degree, it does not reflect the attributes of animal organisms, and so on.
It is evident, then, that each elemental atom of the universe is possessed of a capacity to express all the virtues of the universe...

They meowed in unison that they appreciated my selection.

Kitties and myself wish everyone a productive and wonderful week ahead, and muchas kitty kisses for courage...

Ciao!
Posted by MrsLittleJeans at 9:23 AM