Following the review and discussion of the passage below, obviously selected by none other than Augustus,

"...those individuals who are engaged in government service are exhorted to "approach their duties with entire detachment, integrity and independence of spirit, and with complete consecration and sanctity of purpose." Their personal fulfillment comes not from material reward but from "the devising of methods to insure the progress of the people," from experiencing the "delights of dispensing justice," and drinking from "the springs of a clear conscience and a sincere intent." In the end, the "happiness and greatness, the rank and station, the pleasure and peace" of the public servant does not consist in "his personal wealth, but rather in his excellent character, his high resolve, the breadth of his learning, and his ability to solve difficult problems."

The challenge of overcoming corruption in public life is multidimensional in nature. The adoption of administrative procedures and legal safeguards, however important such measures may be, will not bring about enduring changes in individual and institutional behavior. For governance, in essence, is a moral and spiritual practice whose compass is found within the human heart. Thus, only as the inner lives of human beings are transformed will the vision of a "genuine civilization of character" be realized." (BIC 2001)

they set out to vote!

August said, "Thank you Miss Umber for my cape!" and he feels secure enough to wear a cape that says "Miss Little Jeans"! 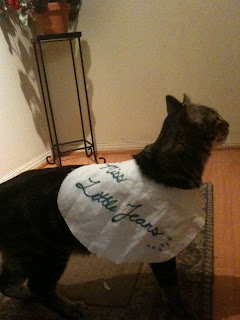 Ollie whispered that he was going to run for office himself! I told him that perhaps in the next elections, 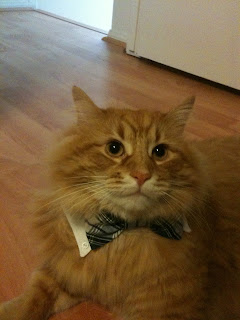 Cat boys did not forget to fill their paws with kisses to disperse love in the air....

Ciao everyone!
Posted by MrsLittleJeans at 5:39 AM