The crow and the parrot...

Having been fooled yesterday by one ginger Ollie cat who had decided to spend all day outdoors and by one Gussy cat who played hide and seek until late evening hours, this mommie cat wisened up this morning. She searched in her bag of tricks and found a way to get the rascals indoors immediately after the dawn-hour walk.
Back indoors under the gentle rays of the beautiful morning sun, 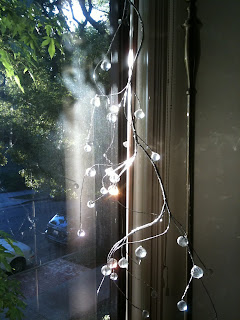 we have two cat boys, Augustus and Ollie, wondering how this happened! 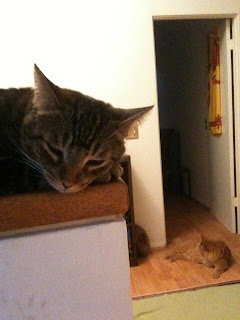 They quickly understood kitty mom's situation wherein she had to be at work without feline worries and assumed the story-listening pose. 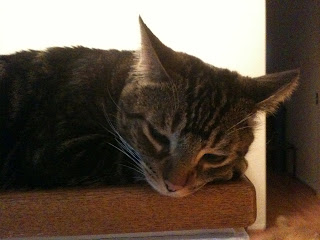 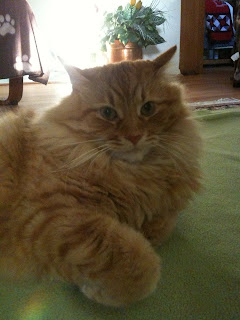 And so I read to them from the Gulistan of Sa'adi:
Story 13

A parrot, having been imprisoned in a cage with a crow, was vexed by the sight and said: 'What a loathsome aspect is this! What an odious figure! What cursed object with rude habits!
0 crow of separation, would that the distance of the east from the west were between us.'
Whoever beholds thee when he rises in the morning
The morn of a day of safety becomes evening to him.
An ill-omened one like thyself is fit to keep thee company
But where in the world is one like thee?

More strange still, the crow was similarly distressed by the proximity of the parrot and, having become disgusted, was shouting 'Lahaul', and lamenting the vicissitudes of time.
He rubbed the claws of sorrow against each other and said: 'What ill-luck is this? What base destiny and chameleonlike times? It was befitting my dignity to strut about on a garden-wall in the society of another crow.
'It is sufficient imprisonment for a devote
To be in the same stable with profligates.
'What sin have I committed that I have already in this life, as a punishment for it, fallen into the bonds of this calamity in company with such a conceited, uncongenial and heedless fool?'
No one will approach the foot of the wall
Upon which they paint thy portrait.
If thy place were in paradise
Others would select. hell.

I have added this parable to let thee know that no matter how much a learned man may hate an ignorant man the latter hates him equally. ( HA HA)
A hermit was among profligates
When one of them, a Balkhi beauty, said:
'If thou art tired of us sit not sour
For thou art thyself bitter in our midst.'
An assembly joined together like roses and tulips!
Thou art withered wood, growing in its midst,
Like a contrary wind and unpleasant frost,
Like snow inert, like ice bound fast.

Though cat boys are not likely to display such behavior they were highly amused at the conversation between the crow and the parrot and giggled a bit quietly.

Before I left they filled their paws with kitty kisses and blew them in the air to wish all a great day.

Ciao everyone!
Posted by MrsLittleJeans at 8:59 AM