It is nearly the same scene every day, on the macroscopic scale, even though the cat boys tell me that everything is different microscopically.  This is what they said when I asked them how they did not tire of the same scenery.
I had to concur as I looked up and glanced deep into the branches of the pine tree, I felt that many molecules had shifted their positions inside some of those piny needles. 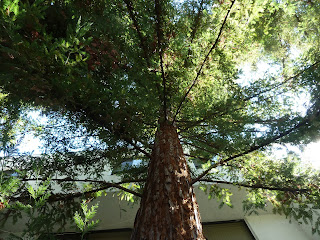 Mr Puffy Pants was closely examining some of the flowers.  Give him a lab coat and he would be hired instantly by the FDA. 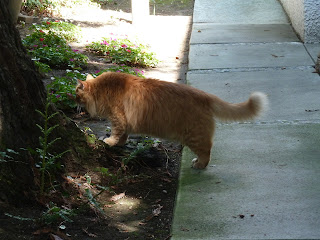 Our impatiens that we were not sure if it would make it, actually made it and now it is tall and slanky.  It passed the experimental stage of its life. 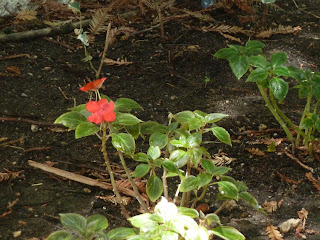 Up on the neighbor patio wall a silent Mr Sweet Pants watched us while not moving his eyes.  He used his wide angle vision to take all in, it was that sort of a moment that one should not disturb by actively moving eyeballs around, you know the kind. 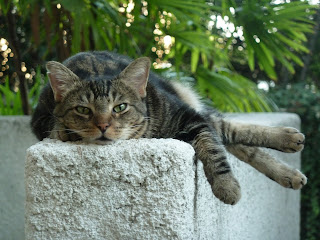 Having absorbed the elements of that picture he closed his eyes and continued enjoying it in his mental bank.
Don't you suppose that that is what the creator does, that he sees the elements alone, that the string of time is irrelevant to Him, that he looks only for pure hearted actions, beautiful deeds, and good intentions?  Well, fact is, we did not know.  We only thought so. 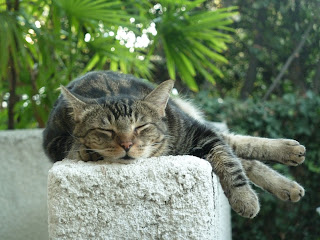 Mr Puffy Pants too fell into the spell of the afternoon moments. 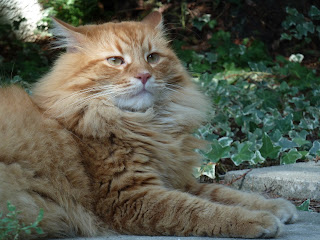 His golden profile gets squeezed by me every night...most lovingly. 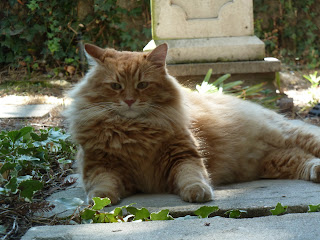 The cat boys reflected on this:

My God, what is a heart,That Thou shouldst it so eye, and wooe,Powring upon it all Thy art,As if that Thou hadst nothing els to do?  (George Herbert)

Then they made you kisses and wished you a very beautiful Wednesday.

Ciao everyone!
Posted by MrsLittleJeans at 1:45 PM