When we were growing up our father would tell us a lot about horses and wild animals, acrobats and lions.  He would take us to the Russian circus when they were in town and tell us about how they traveled and how they trained.

When he was going to buy a car he first asked us if we'd rather have a horse instead?  We already had five dogs, a cat, two canaries, and a parrot.

I was pretty certain at that time, maybe I was four or five, that we were going to join a circus, that we would be gypsies traveling from land to land.  I was already taking lessons in playing the accordion.

I am not sure what brought this memory to the forefront of my memory bank but today when I saw the jag and the lion, perhaps for an instant in my heart and in my head I re-experienced my early childhood imaginations.  Those days I was certain that I would be surrounded by tigers and lions.

Mr Sweet Pants made a pretty scene strolling on the high wall, 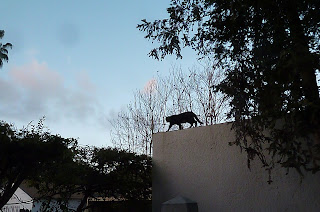 and as he scaled down, silently and skillfully. 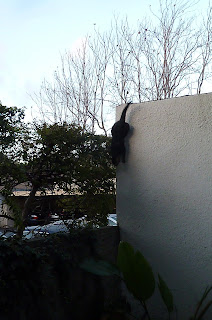 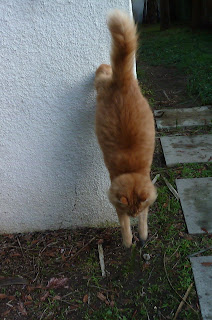 Oh yes...he was ready to greet his brother and me. 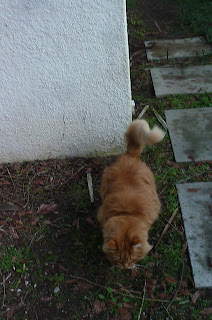 Last night a super talented friend and graduate student in astrophysics at my school gave a talk about science and religion.  She spoke of the galaxies and the primordial soup and the musical waves that densified and became atoms and the atoms that became us.  She reminded us of how we were all made of stardust.

I shared with the cat boys.

"O Son of Bounty! Out of the wastes of nothingness, with the clay of My command I made thee to appear, and have ordained for thy training every atom in existence and the essence of all created things."  (Hidden Words)


Happy Valentine's day and cat kisses to you all!

Ciao!
Posted by MrsLittleJeans at 12:33 PM