I would have liked to share photos of cat boys running and hunting but not today...

Little Ollie is sick. He has been diagnosed with inflammatory bowel disease. He is not allowed out and has to take several medicines that he does not like. 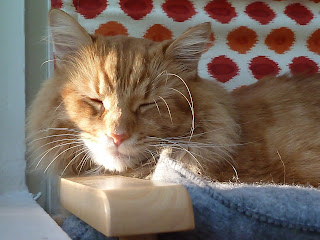 Little Augustus is very concerned. He is used to being attacked by his brother, at least 5 times a day. 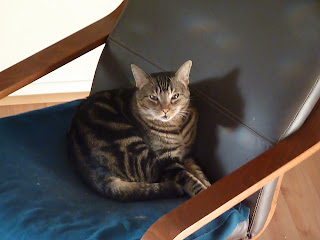 I told Mr Puffy Pants that Sylvester, Augustus and I were very thankful for him. I wanted to know what he was thankful for. 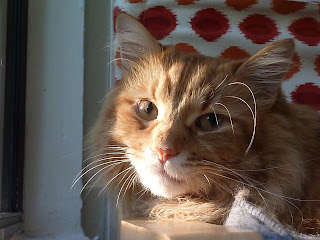 He said that he was thankful for us and for the earth being round instead of flat! I thought that the statement he made was very profound.

We then meditated on this:

"From the exalted source, and out of the essence of His favor and bounty He hath entrusted every created thing with a sign of His knowledge, so that none of His creatures may be deprived of its share in expressing, each according to its capacity and rank, this knowledge. This sign is the mirror of His beauty in the world of creation. The greater the effort exerted for the refinement of this sublime and noble mirror, the more faithfully will it be made to reflect the glory of the names and attributes of God, and reveal the wonders of His signs and knowledge. ..." (Gleanings)

Cat boys decided to spend part of the day reflecting with their eyes closed and the other part making kisses to send out later.

Posted by MrsLittleJeans at 9:50 AM