Augustus came to us in August but he was born in July. 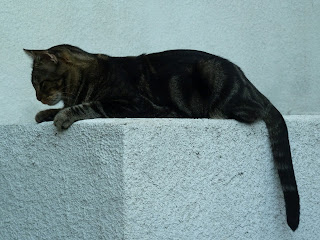 He is a remarkable mix of augustness and sweetness plus a good dose of contrariness only on certain days of the month or certain hours of the day.  He shows his sweetness privately because he does not want other folks to think that he is a pussy. 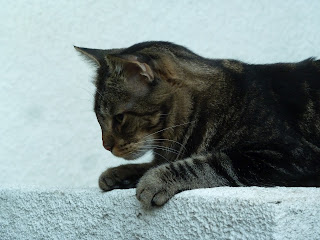 Contemplating, learning and discovery give him joy, and for that we have called him Mr Sweet Pants. 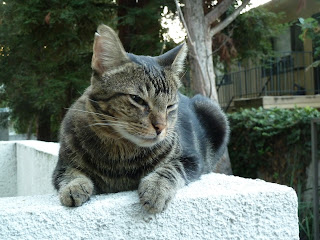 Ollie has a liking for comfortable Puffy Pants, hence the name Mr Puffy Pants.  His chosen name has French roots, Olivier, though he has no French traits at all. He eats herring like a real Swede, does the step dance on our stomachs like an Irish, and spends a good deal of time plotting, like Cato in Pink Panther.  For a while when he was younger he insisted to be called Chief Puffy Pants and we obliged.  Our Chinese neighbor calls him Olive and tries to rub her hands on him for good luck!  Olive finds this very strange but he is usually game.

When he is focusing he looks like a vulcan cat, a cute vulcan with super powers.

Augustus glanced at Ollie who was exerting himself mentally with sweet love expressed in his face. 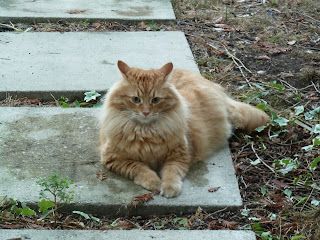 Early this morning we found ourselves ONE squirrel, a young one.  This one did not seem to mind wandering in paw distance of Ollie although Ollie minded that. 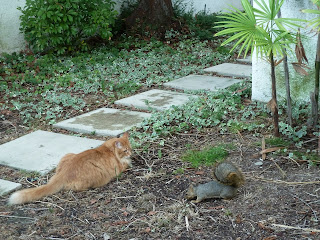 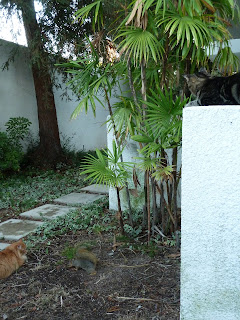 while I found it greatly unusual.  I wondered how far the squirrel was going to go 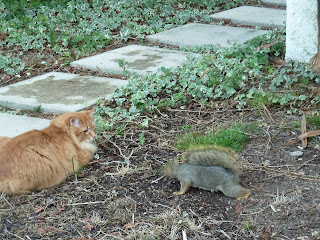 before the orange one would no longer take it.  The squirrel because a shadow at that very moment. 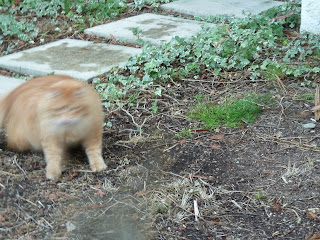 Ollie changed his spot and in no time the game resumed. 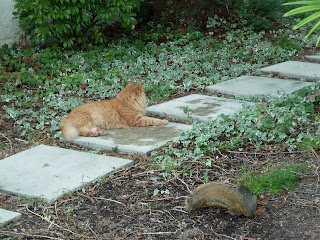 The cat boys wished to reflect upon the Names of Ahura Mazda and see if there was one called Sweet Pants and one called Puffy Pants; and so I read to them from the Avesta:  (I know some might find it odd that our cat boys are initiated into the mystical and divine; frankly, we are puzzled too but we think it is better not to ask too many questions.)


Then Zarathushtra said: 'Reveal unto me that name of thine,
O Ahura Mazda! that is the greatest, the best, the fairest, the
most effective, the most fiend-smiting, the best-healing, that
destroyeth best the malice of Daevas and Men…

Ahura Mazda replied unto him:

'My name is the One of whom questions are asked, O holy Zarathushtra!

'My second name is the Herd-giver


'My third name is the Strong One


'My fourth name is Perfect Holiness.
'My fifth name is All good things created by Mazda, the offspring
of the holy principle.
'My sixth name is Understanding;
'My seventh name is the One with understanding.
'My eighth name is Knowledge;


'My ninth name is the One with Knowledge.


'My nineteenth name is the Creator.
'My twentieth name is MAZDA (the All-knowing One).

Much to their astonishment there were no such names in the list, no Mr Puffy Pants or Mr Sweet Pants and I was actually relieved.  We shall search more later they meowed.

Cat boys made you lovely wishes and sent them to you with pawfuls of kisses....Happy Wednesday Everyone!

PS- incidentally this post was from another recent Wednesday that was like this Wednesday but I decided to post it later to remove the time dimension from our daily experience.  It is all fun no matter when it happened.
Posted by MrsLittleJeans at 10:44 AM