They were both ready to accompany me

when I told the cat boys that I was going to the annual meeting of the Pasadena/Foothills Chapter of the UNA. 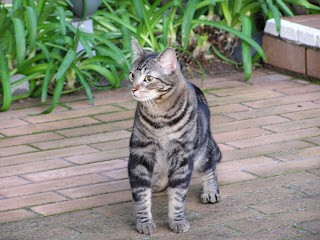 and there's Ollie asking if he should wear a tie to the event. 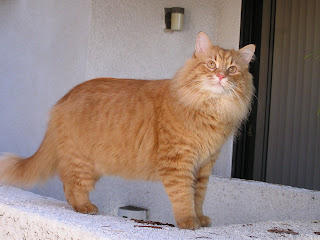 Unfortunately they had to stay behind doing cat activities, such as sniffing the water sprinkler, 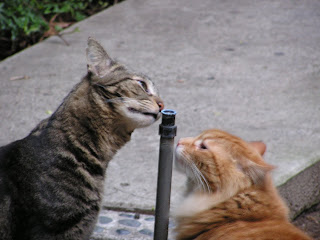 and inspecting the courtyard traffic, 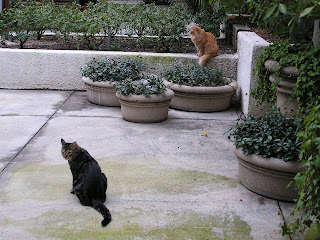 because they were too short to be in a room full of grown up humans.

When I returned I told the boys all about the meeting- UNA elected its new officers, reviewed last year's activities, read summary of Millenium Development Goals, viewed Hilary Clinton's speech on Reproductive Health of Girls and Women, heard the founder of 34 million friends.org, and spoke to people about this, that and the other...all in 2.5 hours!

I told the cat boys that all they needed to know was that women played a significant role in global prosperity and peace and that they should become advocates for women's rights. They could not agree more wholeheartedly, and so we read:

"...The world of humanity is possessed of two wings: the male and the female. So long as these two wings are not equivalent in strength, the bird will not fly. Until womankind reaches the same degree as man, until she enjoys the same arena of activity, extraordinary attainment for humanity will not be realized; humanity cannot wing its way to heights of real attainment. When the two wings or parts become equivalent in strength, enjoying the same prerogatives, the flight of man will be exceedingly lofty and extraordinary. Therefore, woman must receive the same education as man and all inequality be adjusted. Thus, imbued with the same virtues as man, rising through all the degrees of human attainment, women will become the peers of men, and until this equality is established, true progress and attainment for the human race will not be facilitated... as woman advances toward the degree of man in power and privilege, with the right of vote and control in human government, most assuredly war will cease; for woman is naturally the most devoted and staunch advocate of international peace..."
Promulgation of Universal Peace

Cat boys send their usual best wishes with extra special kisses for all the ladies...hasta luego!

Ciao!
Posted by MrsLittleJeans at 10:14 PM