The soft rain this morning 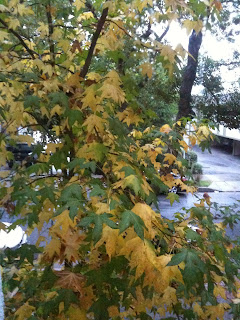 brought our little cat dudes indoors without too much hassle. I saw Ollie scrambling about and figured that he needed a story to settle him down. 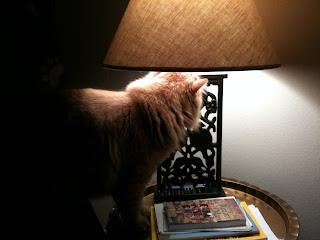 Gussy, on the other hand, had already read my mind and sat prepared. 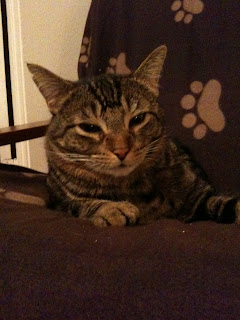 I said, "Ollie, did you want to know about the Magi?" 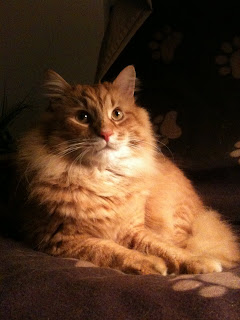 I know the answer was a solid "YES" when I noticed that he assumed the posture of listening, though there remained a glimpse of "what is she talking about" in his hazel eyes. 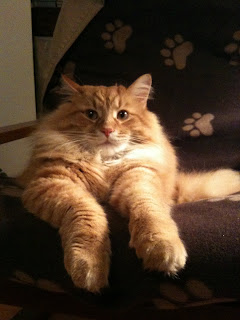 Gussy closed his eyes, he already was envisioning that period of time where people traveled on foot following a star in search of their visions. 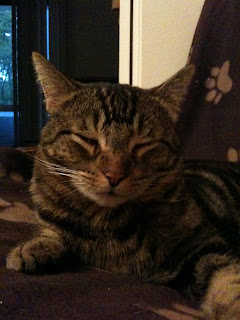 Ollie who felt a little chill coming on, in spite of his comfortable stature, put on his christmas scarf and listened. 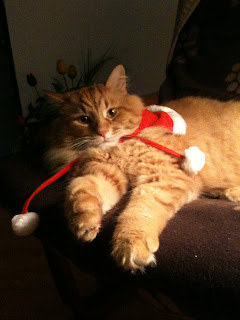 "Among the Prophets was Abraham, the Friend of God. Ere He manifested Himself, Nimrod dreamed a dream. Thereupon, he summoned the soothsayers, who informed him of the rise of a star in the heaven. Likewise, there appeared a herald who announced throughout the land the coming of Abraham.
After Him came Moses, He Who held converse with God. The soothsayers of His time warned Pharaoh in these terms: "A star hath risen in the heaven, and lo! it foreshadoweth the conception of a Child Who holdeth your fate and the fate of your people in His hand." In like manner, there appeared a sage who, in the darkness of the night, brought tidings of joy unto the people of Israel, imparting consolation to their souls, and assurance to their hearts. …
In like manner, when the hour of the Revelation of Jesus drew nigh, a few of the Magi, aware that the star of Jesus had appeared in heaven, sought and followed it, till they came unto the city which was the seat of the Kingdom of Herod. The sway of his sovereignty in those days embraced the whole of that land.
These Magi said: "Where is He that is born King of the Jews? for we have seen His star in the east and are come to worship Him!" When they had searched, they found out that in Bethlehem, in the land of Judea, the Child had been born. This was the sign that was manifested in the visible heaven. As to the sign in the invisible heaven -- the heaven of divine knowledge and understanding -- it was Yahya, son of Zachariah, who gave unto the people the tidings of the Manifestation of Jesus. Even as He hath revealed: "God announceth Yahya to thee, who shall bear witness unto the Word from God, and a great one and chaste." By the term "Word" is meant Jesus, Whose coming Yahya foretold…
From all that We have stated it hath become clear and manifest that before the revelation of each of the Mirrors reflecting the divine Essence, the signs heralding their advent must needs be revealed in the visible heaven as well as in the invisible, wherein is the seat of the sun of knowledge, of the moon of wisdom, and of the stars of understanding and utterance. The sign of the invisible heaven must needs be revealed in the person of that perfect man who, before each Manifestation appeareth, educateth, and prepareth the souls of men for the advent of the divine Luminary, the Light of the unity of God amongst men.”
(Book of Certitude)

While Gussy dreamt of those times 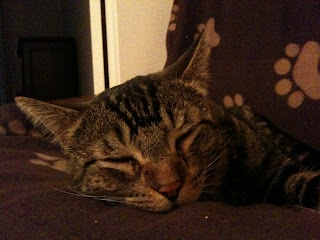 Ollie made little kisses one at a time and blew them in the air for you to wish you a happy weekend! He was most interested in the gifts of Magi! 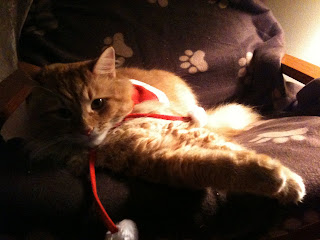 Ciao everyone! Enjoy the weekend!
Posted by MrsLittleJeans at 8:58 AM