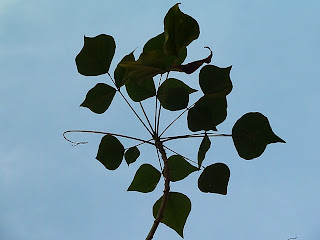 when we went out. We started with some crunches, 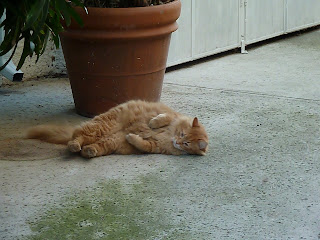 a bit more advanced side crunches, 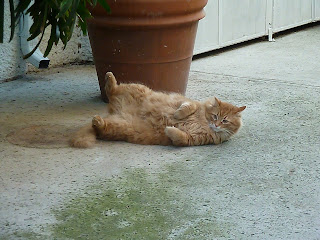 Gustopher also trying but he is too narrow to be able to stay flat! 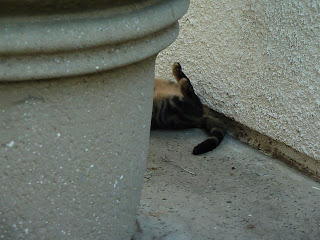 Afterwards, I called them to the story telling courtyard in the back 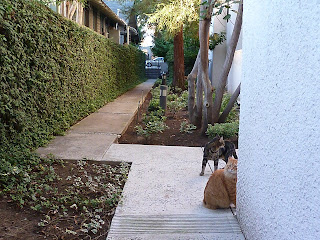 where I first treated the cat boys to some treats, yummy herring and salmon! 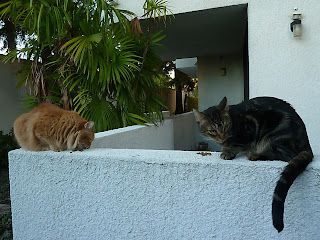 Gustopher had asked for an anectode, a long one, a mystical one and so we read....

"The Sufi and the Judge.
A sick man laboring under an incurable disease went to a physician for advice. The physician felt his pulse, and perceived that no treatment would cure him, and therefore told him to go away and do whatever he had a fancy for. This was the advice given by God to the Israelites when they were seen to be incurable by the admonitions of the prophets. "Do what you will, but God's eye is on all your doings." The sick man blessed the physician for his agreeable prescription, and at once went to a stream, where he saw a Sufi bathing his feet. He was seized with a desire to hit the Sufi on the back, and, calling to mind the physician's advice, at once carried his wish into effect. The Sufi jumped up, and was about to return the blow, but when he saw the weakly and infirm condition of his assailant he restrained himself. He disregarded his present angry impulse, and had regard to the future, so that the non-existent future became to him more really existent than the existing present.
Here the poet digresses to point out that when wise men recognize the true relative importance of the present and the future they cease to shrink from death and annihilation, which lifts them to a higher and nobler life.
The Sufi, being full of the spirit of self-abnegation, did not retaliate on his weak, assailant but led him before the Judge. On learning the facts of the case the Judge said, "This poor one is sick to death, and you, being a Sufi, are, according to your profession, dead to the world. How, then, can I award a penalty against him in your favor? I am a judge, not of the dead, but of the living." The Sufi was dissatisfied with this view of the case, and again pressed the Judge to do him justice. On this the Judge asked the poor sick man how much money he had, and on his replying, "Six dirhams," took pity on him, and let him off with a fine of three dirhams only. The moment the sentence was pronounced the sick man went up to the Judge and struck him a blow on the back, and cried out, "Now take the other three dirhams and let me go!" The Sufi then pointed out to the Judge that by his ill-timed leniency to the sick man he had brought this blow upon himself, and urged him to apply in his own case those principles of mercy and forgiveness, which he had proposed in the case of another. The Judge said that, for his part, he recognized every blow and misfortune that might befall him as divinely ordained, and sent for his good, … and that his judgment in the matter of the sick man had not been dictated by impulse, but by inspiration.
The Sufi again asked him how evils and misfortunes could proceed from the divine fount of good, and the Judge replied that what seems good and evil to us has no absolute existence, but is merely as the foam on the surface of the vast ocean. Moreover, every misfortune occurring to the faithful in this life will be amply compensated for in the life to come. The Sufi asked why this world should not be so arranged that only good should be experienced in it, and the Judge replied by telling him an anecdote of a Turk and a tailor. The Turk, who typifies the careless pleasure-seeker, was so intent on listening to the jokes and amusing stories of the tailor, typifying the seductive world, that he allowed himself to be robbed of the silk which was to furnish him with a vesture for eternity. The Sufi again retorted that he did not see why the world would not get on better without the evil in it, and the Judge replied with the poet's favorite argument that there would be no possibility of being virtuous if there were no temptations to be vicious. As Bishop Butler says, this life is a state of probation, and such a state necessarily involves trials and difficulties and dangers to be resisted and overcome.
The dead regret not dying, but having lost opportunities in life.
Well said that Leader of mankind,
That whosoever passes away from the world
Does not grieve and lament over his death,
But grieves ever over lost opportunities.
He says, "Why did I not keep death always in view,
Which is the treasury of wealth and sustenance?
Why did I blindly all my life set my affections
On vain shadows which perish at death?
My regret is not that I have died,
But that I rested on these vain shadows in life.
I saw not that my body was a mere shadow or foam,
Which foam rises out of and lives on the Ocean...."
Story V, Mathnavi, v.6

I wasn't certain if the cat dudes would be able to focus that long but then I found this ginger boy giggling (he enjoyed the slaps on the head, I think) 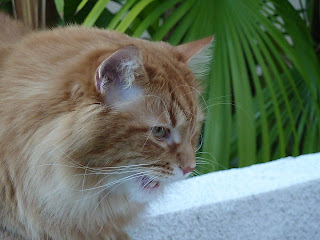 and the other one too!!! 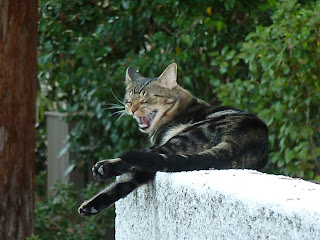 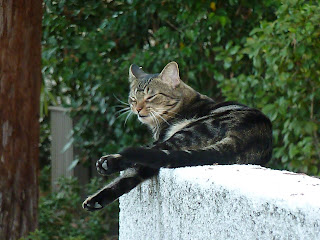 Cat boys filled their big paws with kisses and giggles and blew them in the air for YOU!

Ciao!
Posted by MrsLittleJeans at 11:04 AM

Labels: anectode of the Turk and the Tailor, Mathnavi