Augustus and Ollie in May 2011

Augustus likes to enjoy the gentle warming rays of sun on his slanky body from time to time, it helps him meditate better but he is forced to keep his eyes open in case of sneak attacks. 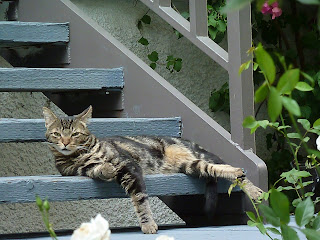 Ollie has to take advantage of every opportunity to plot an attack on his brother. He cannot help it, it is a genetic condition we have decided. I look at him and say, "Hey Mister! Watch it!" 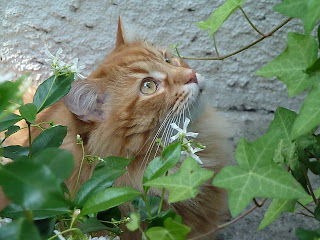 And so he gave me the "I have no idea what you are talking about" look. 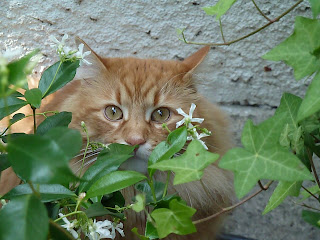 Augustus relaxed but still kept one ear on the alert. 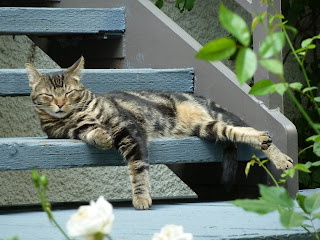 I asked the boys if we could read a rather long passage because at times when my mind is on too many things, it is only the reading of a long passage that helps me to focus. The cat boys immediately agreed and so Ollie selected our reading by pointing his paw over to the book, Dawn Over Mount Hira, again. 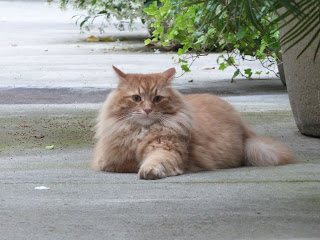 "Man desires a complex and obscure solution to existence; he would rather go bare-foot, subsist entirely on carrots or listen to the voice of his departed uncle issuing at midnight from an aluminium horn, than prefer his neighbour to himself, or confine his business activities to honest ones. Moreover his conduct is not unreasonable, for a peculiarity of the universe is that it may, logically, be made to fit any theory whatever; Schopenhauer, disappointed in love, had little difficulty in blaming the female sex for the French Revolution; while some of our modern scientists could with equal justice attribute the disturbance to a pandemic dysfunctioning of endocrine glands.
Such are human attempts at directing existence. They are by definition imperfect, for obviously a finite mind cannot hope to settle the infinite business of living, any more than unconscious natural phenomena could organize themselves into a disciplined whole...
In the whole range of human experience there is no fellow human being, however great, who can claim us unreservedly; we invariably find, after reading his book or watching him live, that he suffers as we do from human inadequacy; and so it is that Flaubert warns us not to touch our idols, because their gilt comes off on our fingers; and Emerson grows indignant when we exalt another human being and seek our truth from him, because our ideas are easily as valuable as his, we too are subject to 'gleams from within,' we find in every work of genius our own rejected thought.
We all, then, have our gleams from within, even though they are often but the vague phosphorescent lights which skim over graveyards after dark. But if we would see, we must stand in the full beating force of the Sun of Reality, which alone gives truth to the known and the power of knowing to the knower."
Though long, the cat boys really enjoyed the reading, it helped them regain their composure. Then they stood together, filled their paws with many kisses, and blew them in the air for their lovely friends.

Ciao everyone!
Posted by MrsLittleJeans at 1:08 PM