Away for two weeks, yesterday I arrived. As our car pulled in by the curb that cool and sunny morning I heard the familiar meow meows of the cat boys.  As I got out I felt that I was the blank piece of jigsaw puzzle that fell right into its spot.

Life was a bit of the same and a bit different in my inside.  I had left to visit my mom who was sick, rather seriously, and spending time with her each day I felt my soul stretched to places unfamiliar for some time.

The cat boys were interested in showing me around, we noted the bird in the neighbor yard, and the house behind is the cat house with 6 big cats.  I know the cat mom and we try to keep our fellows away from each other. 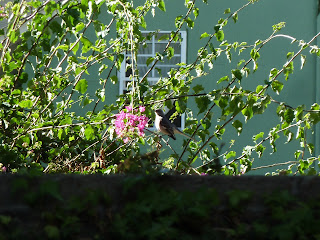 The cat boys took me down the leafy path towards the back, we sniffed the air, 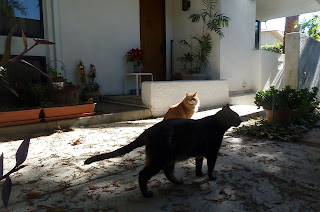 examined the light, noted the temps and the aridity of our surroundings.  The sounds too were crisp, not just the light and the leaves. 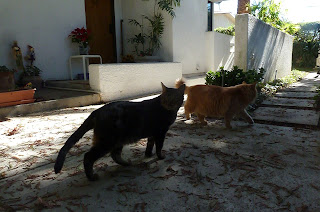 Mr Puffy Pants was seemingly more fluffy and yet more slender, kudos to MrLittleJeans who did not give them heaps of treats the way I do. 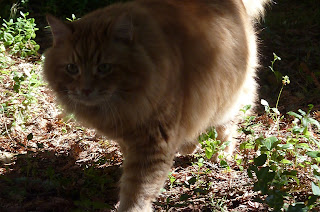 Mr Sweet Pants was sweeter than ever if such a thing could be possible.  He showed me himself and his clear gorgeous shadow too. 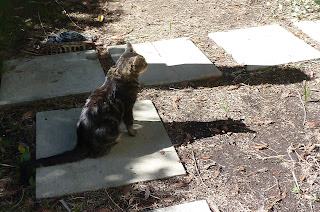 I decided to share with them something I had read that I was examining in my own self...

"And as there are inhabitants that roam the surface of the planet, sometimes alone on windswept sand dunes, sometimes congested in the city streets, so too the countryside within contains some interesting folk.  Indeed, there are multitudes within us, as well as without.  Most live and die unnamed, unknown. For multitudes are hard to become acquainted with, as the most well-meaning would hasten to point out.  Dare we count our myriad doubts and fears, question their intricate lineage and try to disentangle ourselves from their enigmatic control?  Do we care to encounter our stranger prejudices, learn how they hide themselves under our erudition or become acquainted with their characters?  Perhaps it is just as well that the multitudes within us remain nameless, that we send a cheque in their direction once in a while, that we give them a nod of acknowledgement in order to avoid taking them into account every day."  (Four on an Island_Nakhjavvani)

Augustus left to find a private corner for meditation, of course after he sent you kisses. 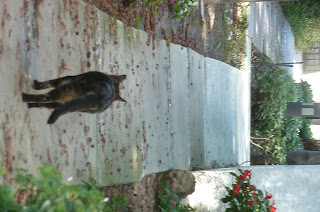 Ollie sat down to think and he too sent kisses. 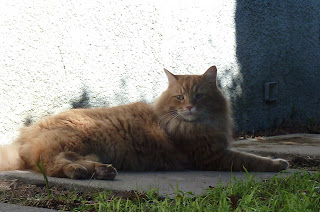 I felt that I was different in some ways...forced to be more of myself because I was the observer in a hospital room that contained four ill people, ill to varying degrees, for twelve days for twelve hours each day.  Most of those hours were spend looking at each person, looking at those who came and left, finding the hidden humor of each moment and making sure that nothing but humor would dare express itself in the neighborhood of those ill folks.  They laughed hard, I am sure harder than they would have had they been well, they were irreverend and unmindful of their relative conditions.

I related to the passage above but in a different way, I became aware of the multitudes within that were stronger and more delightful, that had no prejudices.  I don't want to be there again but I have found hope that the worst of situations can still be the best.

We all missed our cyber buddies...good to know you are all where you are.  Stay healthy and enjoy the cat kisses.

Ciao everyone!
Posted by MrsLittleJeans at 12:38 PM