Santa Anas wreak havoc on furry boys' little bodies, and we in Southern California have been experiencing these winds for the past few days. The current Santa Anas are blowing hot and dry air from the desert towards the ocean.
Augustus has been particularly staticky! Loose bird feathers stick to his body as he walks about in the neighborhood. 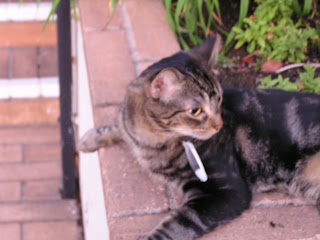 His skin has become very dry requiring constant scratching, which makes matters worse because as he rubs his fur to relieve the dry itchiness he creates more static electricity and zaps himself, which in turn makes him to jump around excited and annoyed. 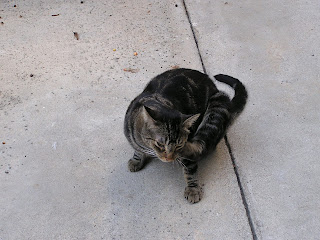 As you can see our little dude is annoyed by all this electricity in his fur! 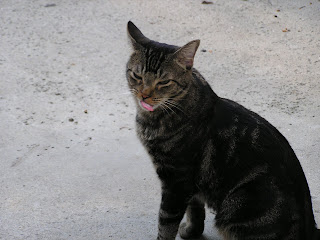 Furry Ollie is not scratching...his fat skin is more immune to the dry winds but brushing his fur zaps him too : ) 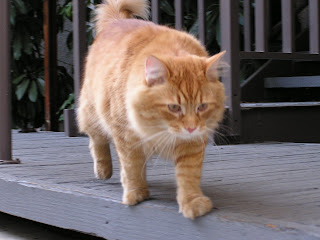 This is what he did after I brushed him, he pretended to have been shocked by electricity! 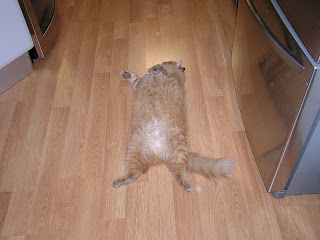 True as that may be, in reality he is only guarding the refrigerator. He knows mommy hides the turkey cold cuts in that big steel box! 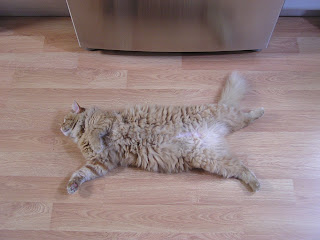 And so to distract the boys from their troubles while simultaneously introduce them to new concepts I read to them the following:

"All material phenomena are subject to nature. All material organisms are captives of nature. None of them can deviate in the slightest from the law of nature. This earth, these great mountains, the animals with their wonderful powers and instincts cannot go beyond natural limitations. All things are captives of nature except man. Man is the sovereign of nature; he breaks nature’s laws... Man is gifted with a power whereby he penetrates and discovers the laws of nature, brings them forth from the world of invisibility into the plane of visibility. Electricity was once a latent force of nature. According to nature’s laws it should remain a hidden secret, but the spirit of man discovered it, brought it forth from its secret depository and made its phenomena visible. It is evident and manifest that man is capable of breaking nature’s laws. How does he accomplish it? Through a spirit with which God has endowed him at creation. This is a proof that the spirit of man differentiates and distinguishes him above all the lower kingdoms. It is this spirit to which the verse in the Old Testament refers when it states that man has been created “after the image and likeness of God”. The spirit of man alone penetrates the realities of God and partakes of the divine bounties." (Foundations of World Unity)

And the next time that we witness that lightning in the sky or the little electrical discharges on the kitties furry bodies we shall recall that this mystery of nature was once latent but today even cat boys know what it is!

Wishing all an electric Friday and electric cat kisses!

Ciao!
Posted by MrsLittleJeans at 5:38 AM