Arc, circle, what are you telling me?

We were sitting in the courtyard, yesterday, early morning or afternoon, I do not recall. I noticed a new feline arrangement and after moments of keen perception I understood that kitty masters wanted a profound reading on the topic of arcs of ascent and descent! 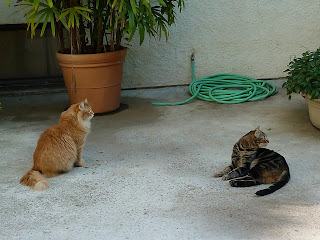 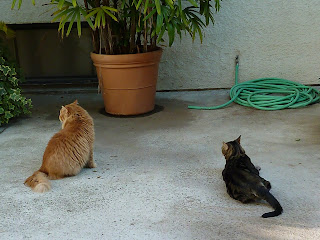 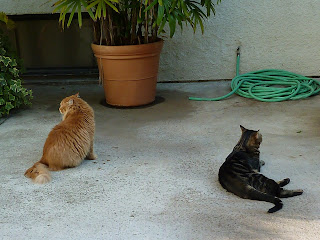 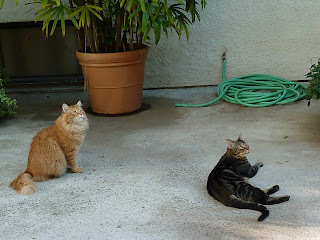 Breathless with pride though I was, I did not let them know, and quickly grabbed the first thing I found on this topic. Here it is. After reading you will again understand why we are in a constant state of awe and intrigue with these boys.

"The Theosophists believe that man on the arc of ascent will return many times until he reaches the Supreme Center; in that condition matter becomes a clear mirror, the light of the spirit will shine upon it with its full power, and essential perfection will be acquired. Now, this is an established and deep theological proposition, that the material worlds are terminated at the end of the arc of descent, and that the condition of man is at the end of the arc of descent, and at the beginning of the arc of ascent, which is opposite to the Supreme Center. ...The arc of descent is called beginning, and that of ascent is called progress. The arc of descent ends in materialities, and the arc of ascent ends in spiritualities. The point of the compass in describing a circle makes no retrograde motion, for this would be contrary to the natural movement and the divine order; otherwise, the symmetry of the circle would be spoiled.

Moreover, this material world has not such value or such excellence that man, after having escaped from this cage, will desire a second time to fall into this snare. No, through the Eternal Bounty the worth and true ability of man becomes apparent and visible by traversing the degrees of existence, and not by returning. When the shell is once opened, it will be apparent and evident whether it contains a pearl or worthless matter. When once the plant has grown it will bring forth either thorns or flowers; there is no need for it to grow up again. Besides, advancing and moving in the worlds in a direct order according to the natural law is the cause of existence, and a movement contrary to the system and law of nature is the cause of nonexistence. The return of the soul after death is contrary to the natural movement, and opposed to the divine system.

...the spirit is an incorporeal being, and does not enter and come forth, but is only connected with the body as the sun is with the mirror. If it were thus, and the spirit by returning to this material world could pass through the degrees and attain to essential perfection, it would be better if God prolonged the life of the spirit in the material world until it had acquired perfections and graces; it then would not be necessary for it to taste of the cup of death, or to acquire a second life.

The idea that existence is restricted to this perishable world, and the denial of the existence of divine worlds, originally proceeded from the imaginations of certain believers in reincarnation; but the divine worlds are infinite. If the divine worlds culminated in this material world, creation would be futile: nay, existence would be pure child's play..."
(Some Answered Questions)
After the reading cat boys looked at me deeply, or with some other emotion, and told me that they would be sending you pawfuls of kisses and best wishes. Enjoy! 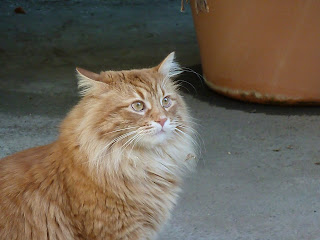 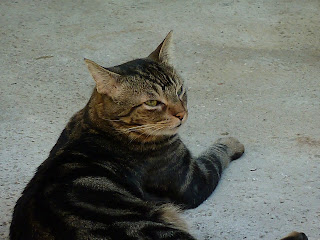 Until next visit...Meow! Ciao!
Posted by MrsLittleJeans at 8:28 AM

Labels: arc of ascent and descent