Merging at what speed?

I have finally come to realize that whether I leave town for 2 days or for more, I still have to merge into my present life at full speed ... good or bad, I am not sure, I only know that this is how it is.
Having spent a good day trying to figure out how to best merge, it occurred to me that one very important thing demanded attention, and that was sitting around the pow wow table with the catboys.
So out we went to the cement patio and we looked up at our blue sky... 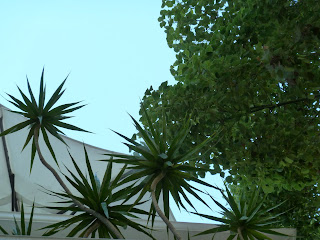 Augustus made himself comfortable on the wall, positioned so to keep an eye on the street side while sill able to participate in the conversation. 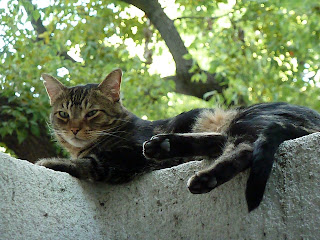 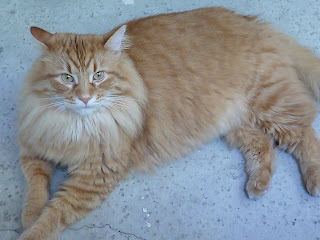 to sit on the table so he could light up the sage bundle and make the atmosphere sacred and smoky! (He insists that he is an American Indian but we suspect he is Swedish with a hint of Irish!) 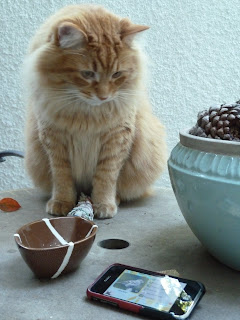 I told the catboys about the hawthorne tree 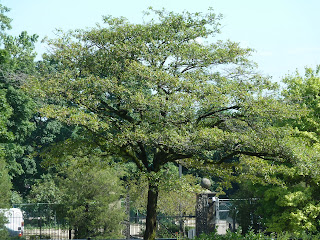 that was growing in the gardens surrounding this House of Worship 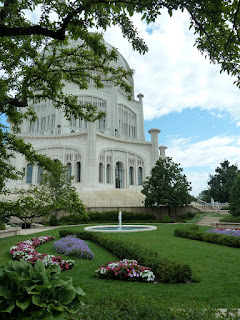 I told them how the intricate lace pattern made the cement look like a doily but they did not know what a doily was! 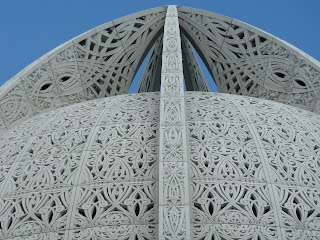 I told them that I spotted a bird's nest with live chickies, hidden exactly where little wires were installed to prevent the very same thing... 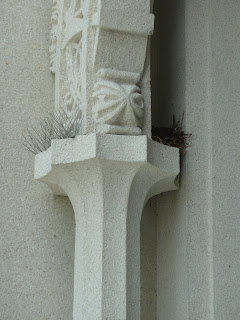 August suggested that we read a bit... 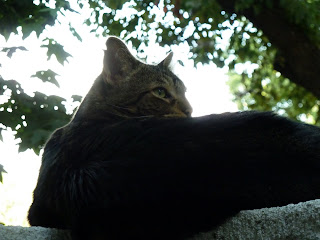 "... this limitless universe is like the human body, all the members of which are connected and linked with one another with the greatest strength. How much the organs, the members and the parts of the body of man are intermingled and connected for mutual aid and help, and how much they influence one another! In the same way, the parts of this infinite universe have their members and elements connected with one another, and influence one another spiritually and materially.
For example, the eye sees, and all the body is affected; the ear hears, and all the members of the body are moved. Of this there is no doubt; and the universe is like a living person. Moreover, the connection which exists between the members of beings must necessarily have an effect and impression, whether it be material or spiritual.

For those who deny spiritual influence upon material things we mention this brief example: wonderful sounds and tones, melodies and charming voices, are accidents which affect the air—for sound is the term for vibrations of the air—and by these vibrations the nerves of the tympanum of the ear are affected, and hearing results. Now reflect that the vibration of the air, which is an accident of no importance, attracts and exhilarates the spirit of man and has great effect upon him: it makes him weep or laugh; perhaps it will influence him to such a degree that he will throw himself into danger. Therefore, see the connection which exists between the spirit of man and the atmospheric vibration, so that the movement of the air becomes the cause of transporting him from one state to another, and of entirely overpowering him; it will deprive him of patience and tranquillity. Consider how strange this is, for nothing comes forth from the singer which enters into the listener; nevertheless, a great spiritual effect is produced. Therefore, surely so great a connection between beings must have spiritual effect and influence.

It has been mentioned that the members and parts of man affect and influence one another. For example, the eye sees; the heart is affected. The ear hears; and the spirit is influenced. The heart is at rest; the thoughts become serene, and for all the members of man’s body a pleasant condition is realized. What a connection and what an agreement is this! Since this connection, this spiritual effect and this influence, exists between the members of the body of man, who is only one of many finite beings, certainly between these universal and infinite beings there will also be a spiritual and material connection. Although by existing rules and actual science these connections cannot be discovered, nevertheless, their existence between all beings is certain and absolute..." (Some Answered Questions)

I then told the catboys that I felt so much better ... I know their love filled the air with calming vibes which soothed my city soul or perhaps it was the burning sage!

Cat boys filled their paws with kisses and blew them in the air for their friends!

Ciao
Posted by MrsLittleJeans at 3:46 PM