Summoned at an early hour...

It was still dark when I was summoned to take the royal felines for their morning walk. We started with treats while we inspected the surroundings. 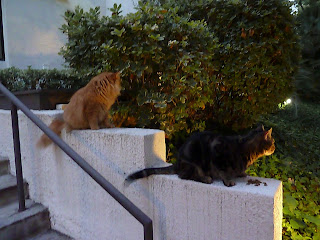 My glance caught this patch of grass, which though not as green as the neighbor's, readily won my approval! 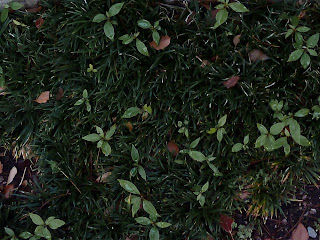 Next was the time to stroll down the street, and as I tried to snap photos of Ollie who does not like to give away his pictures freely, it occurred to me that he should be called "Runs like the Wind"! 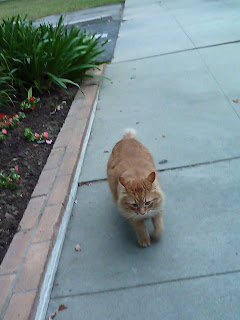 We are down and up and there is much chasing around...we really do play this game every day! And yes, I do have another full-time job! 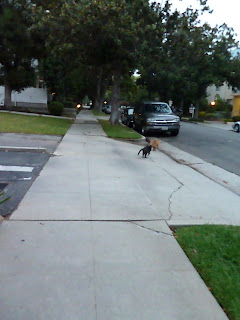 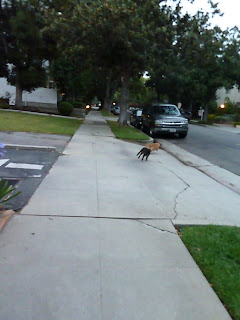 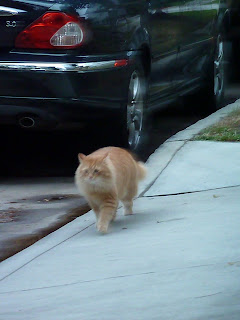 Look at him go...he runs so fast that his ears fold back!!! 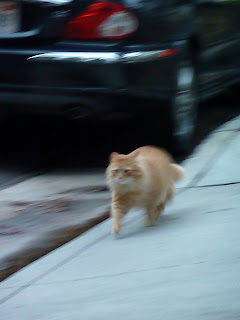 Back in the condo kitty playground, I am now asked to play our other game. "I am waiting", says Augustus. 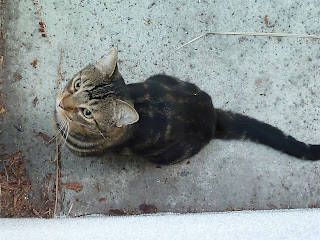 Ollie is under the influence of some weed that has him rolling in the mulchy debris, 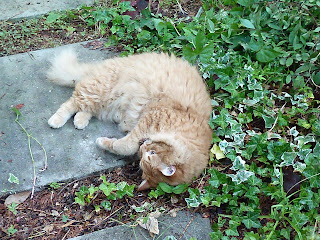 until he decides to play my part of this game. Thank you Olser boy! 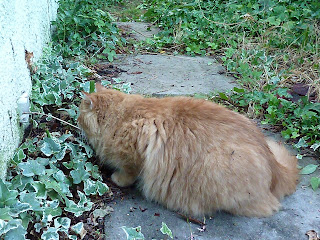 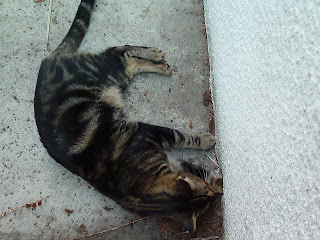 Phase three...time to read and reflect...and so, without any hesitation August and Ollie assumed reading poses: 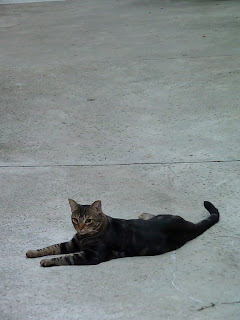 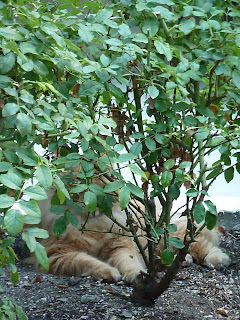 We read this:
"The human body is in reality very weak; there is no physical body more delicately constituted. One mosquito will distress it; the smallest quantity of poison will destroy it; if respiration ceases for a moment, it will die. What instrument could be weaker and more delicate? A blade of grass severed from the root may live an hour, whereas a human body deprived of its forces may die in one minute. But in the proportion that the human body is weak, the spirit of man is strong. It can control natural phenomena; it is a supernatural power which transcends all contingent beings. It has immortal life, which nothing can destroy or pervert. If all the kingdoms of life arise against the immortal spirit of man and seek its destruction, this immortal spirit, singly and alone, can withstand their attacks in fearless firmness and resolution because it is indestructible and empowered with supreme natural virtues. For this reason we say that the spirit of man can penetrate and discover the realities of all things, can solve the secrets and mysteries of all created objects. While living upon the earth, it discovers the stars and their satellites; it travels underground, finds the metals in their hidden depths and unlocks the secrets of geological ages. It can cross the abysses of interstellar space and discover the motion of inconceivably distant suns. How wonderful it is! ... It can penetrate the mysteries of the divine Kingdom and attain to everlasting life. .. How wonderful it is! How powerful the spirit of man, while his body is so weak! If the susceptibilities of the spirit control him, there is no created being more heroic, more undaunted than man; but if physical forces dominate, you cannot find a more cowardly or fearful object because the body is so weak and incapable. Therefore, it is divinely intended that the spiritual susceptibilities of man should gain precedence and overrule his physical forces. In this way he becomes fitted to dominate the human world by his nobility and stand forth fearless and free, endowed with the attributes of eternal life." Promulgation of Universal Peace

My body did feel delicate, this early morning in August, but my inside felt surprisingly undaunted, much like the two cat boys, and I felt very grateful for that feeling.
Naughty boys who had me running back and forth filled their big paws with special kisses and blew them in the air for YOU!
Have a lovely Wednesday! Ciao!
Posted by MrsLittleJeans at 9:11 AM