Most certainly due to the influence of stars...

Each morning when we get up and go out and about we three always check the skies. For me, this view is always pleasing, it is always the same view though of course the skies, the trees, the colors change. I think it transports me to a Mediterranean location that my heart finds pleasing and I don't even know where that spot really is. 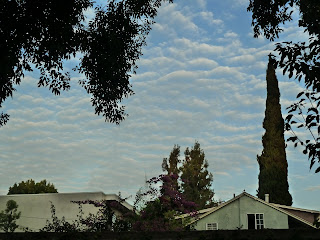 We were talking about predestination yesterday, and cat boys had so much on their brilliant minds, what about volition, what about foreknowledge, influence of stars???
Their posture told me that they were in a reflective mood. We sat around in one spot, pondering, 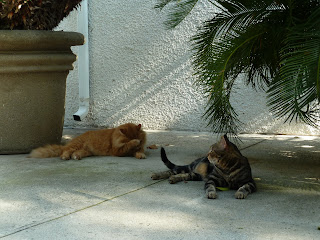 They looked one way. 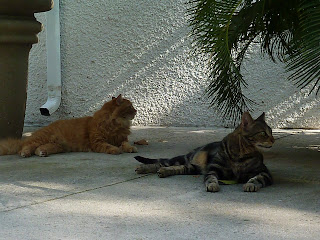 They looked at each other. Of course I know they are discussing ideas all the time, only with the glances of their gorgeous eyes. 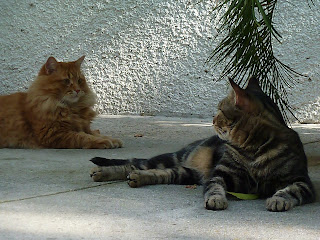 One idea was too deep and Ollie had to stretch. 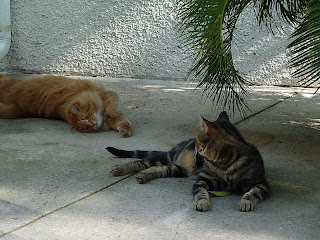 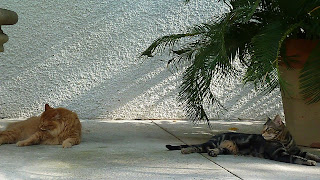 Augustus with a delicate smile makes me wonder. 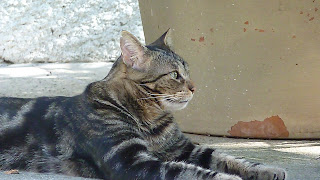 Ollie thinks he must send kisses but it is too early. 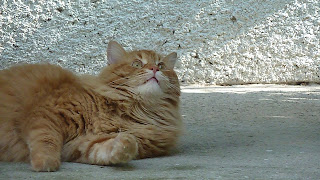 For our reading the two precious cat boys chose a more private spot in the scruffy backyard. 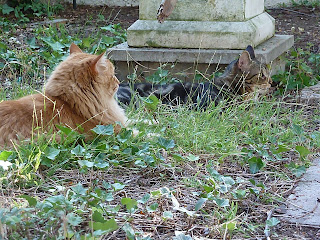 As they looked at each other, I realized that I had never seen the two together in that spot, never, ever. It really must be the influence of those stars that I do not believe in. Oyyyy! 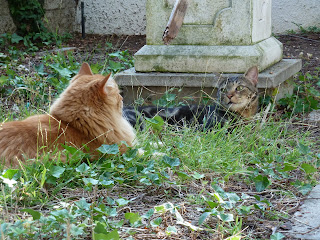 Yup...we are reading now...and they are reflecting in the next scenes. 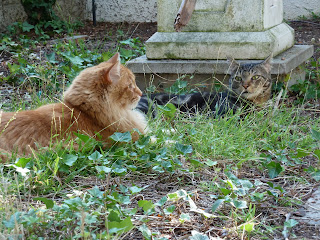 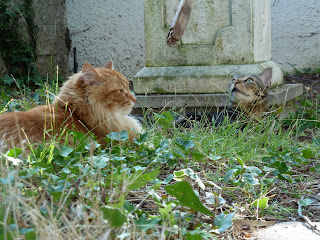 "Question. -- Have the stars of the heavens any influence upon the human soul, or have they not?
Answer. -- Some of the celestial stars have a clear and apparent material effect upon the terrestrial globe and the earthly beings, which needs no explanation. Consider the sun, which through the aid and the providence of God develops the earth and all earthly beings. Without the light and heat of the sun, all the earthly creatures would be entirely nonexistent.

With regard to the spiritual influence of stars, though this influence of stars in the human world may appear strange, still, if you reflect deeply upon this subject, you will not be so much surprised at it. My meaning is not, however, that the decrees which the astrologers of former times inferred from the movements of the stars corresponded to occurrences; for the decrees of those former astrologers were forms of imagination which were originated by Egyptian, Assyrian and Chaldean priests; nay, rather, they were due to the fancies of Hindus, to the myths of the Greeks, Romans and other star worshipers.
But I mean that this limitless universe is like the human body, all the members of which are connected and linked with one another with the greatest strength. How much the organs, the members and the parts of the body of man are intermingled and connected for mutual aid and help, and how much they influence one another! In the same way, the parts of this infinite universe have their members and elements connected with one another, and influence one another spiritually and materially.
...
For those who deny spiritual influence upon material things we mention this brief example: wonderful sounds and tones, melodies and charming voices, are accidents which affect the air -- for sound is the term for vibrations of the air -- and by these vibrations the nerves of the tympanum of the ear are affected, and hearing results. Now reflect that the vibration of the air, which is an accident of no importance, attracts and exhilarates the spirit of man and has great effect upon him: it makes him weep or laugh; perhaps it will influence him to such a degree that he will throw himself into danger. Therefore, see the connection which exists between the spirit of man and the atmospheric vibration, so that the movement of the air becomes the cause of transporting him from one state to another, and of entirely overpowering him; it will deprive him of patience and tranquillity. Consider how strange this is, for nothing comes forth from the singer which enters into the listener; nevertheless, a great spiritual effect is produced. Therefore, surely so great a connection between beings must have spiritual effect and influence.
...
To conclude: the beings, whether great or small, are connected with one another by the perfect wisdom of God, and affect and influence one another. If it were not so, in the universal system and the general arrangement of existence, there would be disorder and imperfection. But as beings are connected one with another with the greatest strength, they are in order in their places and perfect. This subject is worthy of examination." (Some Answered Questions)

When I finish and look about I see Augustus looking like this and I get the giggles. 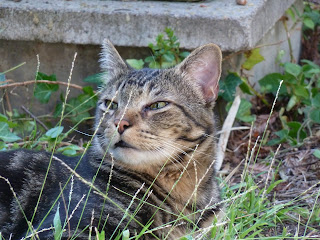 Incidentally, cat boys were born in July 4 years ago. We love them so. They filled their paws with kisses and blew them in the air for you. 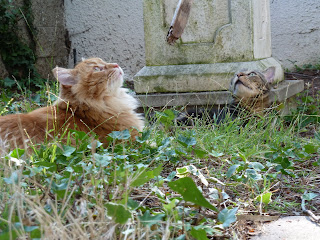 Wishing all a happy weekend and many many kisses.

Ciao!
Posted by MrsLittleJeans at 9:01 AM