In our world the early mornings offer a lot to see and to ponder. It is probably exactly the same in your world. On this early morning I was not surprised to see the two Misters busy doing their cat thing. After all I am the enabler, I disperse the seeds for the squirrels and I take the cats out back to the theatre.
On this particular morning Mr Sweet Pants was the one who noticed the rustle in the debris and his crouch signaled to Mr Puffy Pants that something interesting was about to happen. 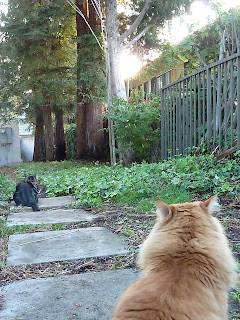 I want you to know that chubby and fluffy as Ollie might be, and he is, what he is definitely not is being lethargic. Mr Puffy Pants is not familiar with the concept of inertia and so he always springs into action, promptly. 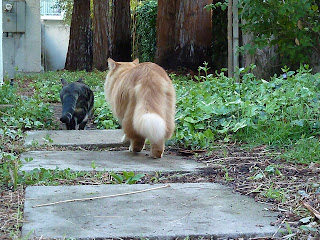 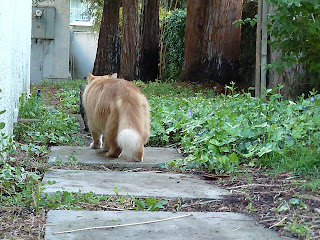 and in their adorable hunter crouch, 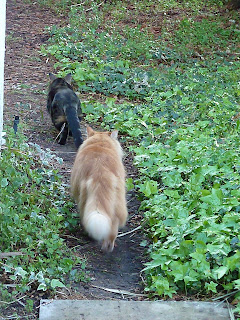 the cat boys checked the little squirrel up and down with excitement, 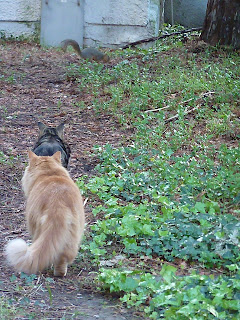 and mutually arrived at the idea that he was not all that interesting or perhaps, "do we really want this dude?", and so they stopped having entirely enjoyed the game just for its own sake... 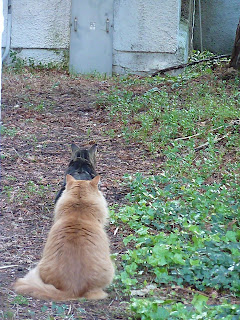 This posture I cannot figure out but then again that is Ollie! 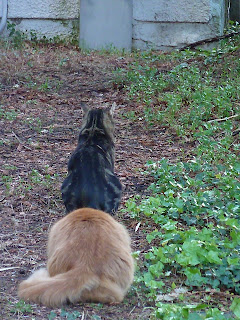 While they were busy with their thing and I was clicking my camera away I was also thinking about my conception of the world around me, what was the framework I was conceptualizing for the world that shaped around me? What were those bits of 'acquired knowledge' that were not necessary and gave me a negative outlook and what were the positive ones. Was I laser-like in my analysis of the world or more like a hummingbird.
Hearing the tsk tsk of a hummingbird above I called the cat boys over to another corner and asked them to look above. 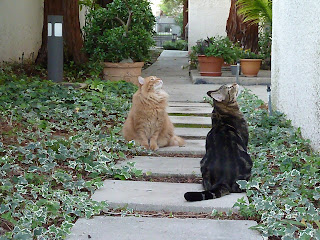 They observed the hummingbird swiftly zipping back 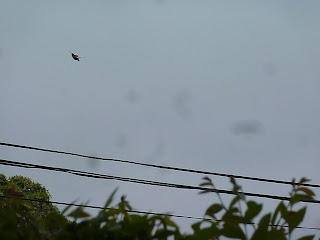 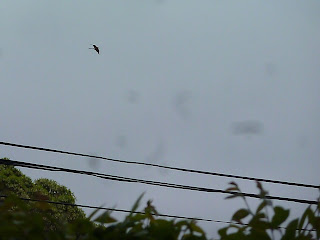 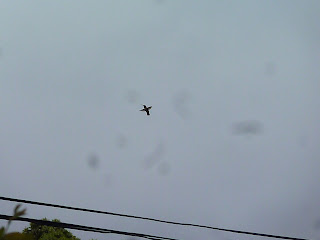 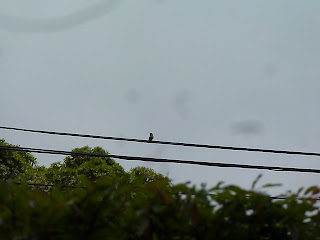 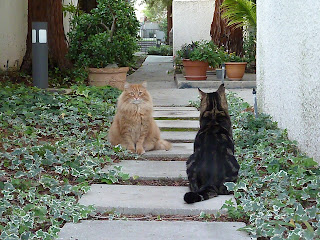 encouraging us to balance our fox and our hummingbird. Ha ha! Those boys are clever indeed, sly as foxes and aware of their environment as hummingbirds. I was forced to kiss them both on their funny faces.
I don't have really much to say except that I like to apply this to the way I restructure my conceptual framework of this world, what do I expect it to be like and what my role would have to be. This is all too much for a beautiful day like today but something to think about for later.
Cat boys sent kisses and best wishes like they always do...
Ciao!
Posted by MrsLittleJeans at 2:34 PM