Inspiration in my backyard...

Last night I went to an informal gathering, a talk, at the home of Judges Jim (formerly superior court, now retired) and Dorothy Nelson, still active jurist on the United States Court of Appeals, Ninth District. More honored I cannot be, and so would you if you knew these people who are role models to the community they serve. And I think if all superior court judges resemble only slightly these two in the extent of genuine services offered, then we truly do live in a great country and we can rest that all hell has not come apart.

So I called the boys to a brief pow-wow session. They need to know everything, and of course this they must because I want them to aspire to higher things in life (only fair because I expect the same of moi)

So they both come, 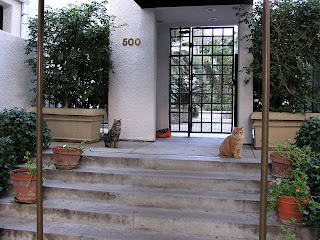 and they sit listening to me telling them about Judge Nelson and the recent ceremony where she was awarded the outstanding jurist of 2009 for the US Court of Appeals, Ninth District. 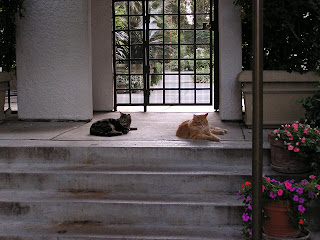 And this explains this cookie that she gave me (after I oohed and aahed hoping that she would give me one) honoring her services at a luncheon banquet. The boys applauded with great meows that I cannot reproduce for you. 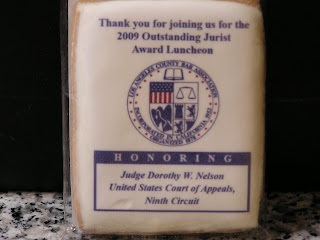 Incidentally, at their home, a most talented local poetess/author (Esther DeTally) spoke of mysticism/becoming your true self/where we are/where we are going/the journey of life, etc., which are ever present thoughts in my head. I stayed until 9:30 after which I thought I better run back and get my doodles off the street. This was a good idea because Ollie was hassling the neighbor's black bunny, Johnny Cash.

Later, he tried to show me how he had practiced meditation, and I think he needs to work at it a bit more. Don't you agree? 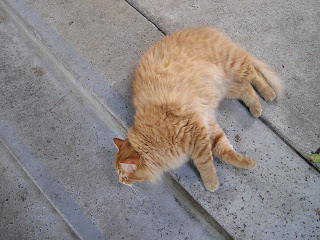 PS- Judge Dorothy Nelson was the first female Dean of USC School of Law, introduced the area of 'Mediation' as opposed to 'Litigation', was among those who stood for blacks being admitted to her law class at USC...many stories about her and of course her husband and how they contributed to the betterment of our world (truly inspiring and outstanding especially in view of their genuine humility)

Wishing all inspiration (especially in your own backyard) this Thursday May 28, 2009, the only one of its kind.

Ciao!
Posted by MrsLittleJeans at 5:52 AM