Who is guarding our house? The night watchman? 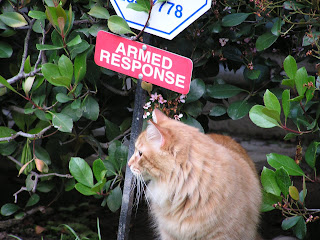 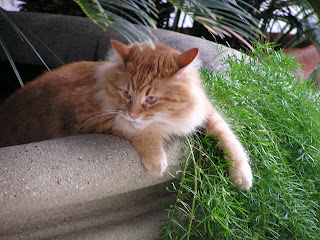 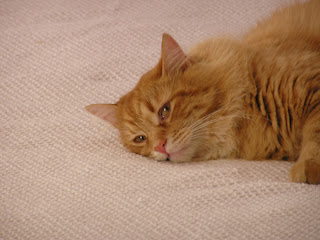 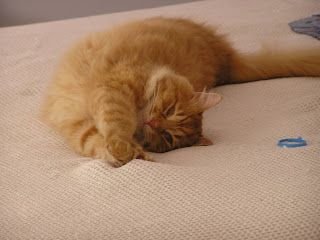 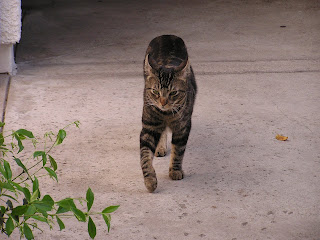 You may have been wondering where we were. No updates, no blog entries?! Well, Ollie was trying for the position of night watchman and we were doing a test run. As the photographs show, this is not his calling. We are thinking perhaps a sous chef or a mattress inspector?

Augustus seems to be prepared for the job; he ran up to me with this passage that I am about to share with you. He sees other purposes for the night watchman. Read his selection for today's reading and reflection.

"There was once a lover who had sighed for long years in separation from his beloved, and wasted in the fire of remoteness. From the rule of love, his heart was empty of patience, and his body weary of his spirit; he reckoned life without her as a mockery, and time consumed him away. How many a day he found no rest in longing for her; how many a night the pain of her kept him from sleep; his body was worn to a sigh, his heart's wound had turned him to a cry of sorrow. He had given a thousand lives for one taste of the cup of her presence, but it availed him not. The doctors knew no cure for him, and companions avoided his company; yea, physicians have no medicine for one sick of love, unless the favor of the beloved one deliver him.

At last, the tree of his longing yielded the fruit of despair, and the fire of his hope fell to ashes. Then one night he could live no more, and he went out of his house and made for the marketplace. On a sudden, a watchman followed after him. He broke into a run, with the watchman following; then other watchmen came together, and barred every passage to the weary one. And the wretched one cried from his heart, and ran here and there, and moaned to himself: "Surely this watchman is Izrá'íl, my angel of death, following so fast upon me; or he is a tyrant of men, seeking to harm me." His feet carried him on, the one bleeding with the arrow of love, and his heart lamented. Then he came to a garden wall, and with untold pain he scaled it, for it proved very high; and forgetting his life, he threw himself down to the garden.

And there he beheld his beloved with a lamp in her hand, searching for a ring she had lost. When the heart-surrendered lover looked on his ravishing love, he drew a great breath and raised up his hands in prayer, crying: "O God! Give Thou glory to the watchman, and riches and long life. For the watchman was Gabriel, guiding this poor one; or he was Isráfíl, bringing life to this wretched one!"

Indeed, his words were true, for he had found many a secret justice in this seeming tyranny of the watchman, and seen how many a mercy lay hid behind the veil. Out of wrath, the guard had led him who was athirst in love's desert to the sea of his loved one, and lit up the dark night of absence with the light of reunion. He had driven one who was afar, into the garden of nearness, had guided an ailing soul to the heart's physician.

Now if the lover could have looked ahead, he would have blessed the watchman at the start, and prayed on his behalf, and he would have seen that tyranny as justice; but since the end was veiled to him, he moaned and made his plaint in the beginning. Yet those who journey in the garden land of knowledge, because they see the end in the beginning, see peace in war and friendliness in anger.

Such is the state of the wayfarers in this Valley (Valley of Knowledge); but the people of the Valleys above this see the end and the beginning as one; nay, they see neither beginning nor end, and witness neither "first" nor "last." [Qur'án 57:3.] Nay rather, the denizens of the undying city, who dwell in the green garden land, see not even "neither first nor last"; they fly from all that is first, and repulse all that is last. For these have passed over the worlds of names, and fled beyond the worlds of attributes as swift as lightning. Thus is it said: "Absolute Unity excludeth all attributes." [Saying attributed to `Alí.] And they have made their dwelling-place in the shadow of the Essence.


I think this is an amazing story and even more astonishing is Augustus' ability to read and recall these tales. Like I have said it before, we feel super fortunate to have found our little guy.


Happy Monday and happy reflections to all!

-m
Posted by MrsLittleJeans at 5:39 AM