A busy weekend did not leave much time for mommy to create a cat diary but boys were entirely relieved. Between me and the paparazzi there is little peace for these boys and I have noticed that they try to wear glasses and hats to go incognito. So I will share only two pictures from this past weekend. 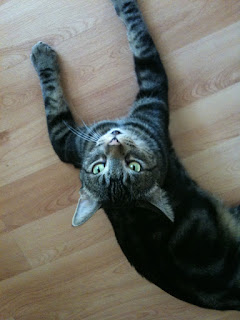 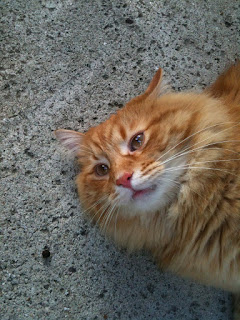 And as for our meditative reading, August selected a passage from an essay called "The Tablet to August Forel". (You DID notice that August shares the same name as Dr Forel.)
"As to the attributes and perfections such as will, knowledge, power and other ancient attributes that we ascribe to that Divine Reality, these are the signs that reflect the existence of beings in the visible plane and not the absolute perfections of the Divine Essence that cannot be comprehended. For instance, as we consider created things we observe infinite perfections, and the created things being in the utmost regularity and perfection we infer that the Ancient Power on whom dependeth the existence of these beings, cannot be ignorant; thus we say He is All-Knowing. It is certain that it is not impotent, it must be then All-Powerful; it is not poor, it must be All-Possessing; it is not non-existent, it must be Ever-Living. The purpose is to show that these attributes and perfections that we recount for that Universal Reality are only in order to deny imperfections, rather than to assert the perfections that the human mind can conceive. Thus we say His attributes are unknowable.
In fine, that Universal Reality with all its qualities and attributes that we recount is holy and exalted above all minds and understandings. As we, however, reflect with broad minds upon this infinite universe, we observe that motion without a motive force, and an effect without a cause are both impossible; that every being hath come to exist under numerous influences and continually undergoeth reaction. These influences, too, are formed under the action of still other influences. For instance, plants grow and flourish through the outpourings of vernal showers, whilst the cloud itself is formed under various other agencies and these agencies in their turn are reacted upon by still other agencies. For example, plants and animals grow and develop under the influence of what the philosophers of our day designate as hydrogen and oxygen and are reacted upon by the effects of these two elements; and these in turn are formed under still other influences. The same can be said of other beings whether they affect other things or be affected. Such process of causation goes on, and to maintain that this process goes on indefinitely is manifestly absurd. Thus such a chain of causation must of necessity lead eventually to Him who is the Ever-Living, the All-Powerful, who is Self-Dependent and the Ultimate Cause. This Universal Reality cannot be sensed, it cannot be seen. It must be so of necessity, for it is All-Embracing, not circumscribed, and such attributes qualify the effect and not the cause.
And as we reflect, we observe that man is like unto a tiny organism contained within a fruit; this fruit hath developed out of the blossom, the blossom hath grown out of the tree, the tree is sustained by the sap, and the sap formed out of earth and water. How then can this tiny organism comprehend the nature of the garden, conceive of the gardener and comprehend his being? That is manifestly impossible. Should that organism understand and reflect, it would observe that this garden, this tree, this blossom, this fruit would in no wise have come to exist by themselves in such order and perfection. Similarly the wise and reflecting soul will know of a certainty that this infinite universe with all its grandeur and perfect order could not have come to exist by itself."

You may think this passage was too long for the cats but this was not so. I had their attention for a long time although I don't know what they were exactly thinking.

Wishing all cat kisses and secret cat stares this Monday in the month of AUGUST!

Ciao!
Posted by MrsLittleJeans at 6:22 AM