Yesterday we went out into the courtyard to shoot the breeze Augustus and Ollie told me that they wanted their discourses to have spiritual significance! I was really not sure what topics would be of spiritual import to a pair of lovely kitties but I decided not to ask for fear of appearing to be stupid. 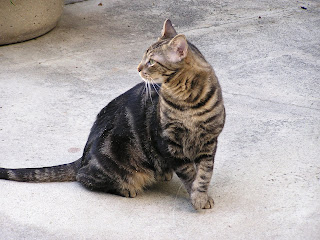 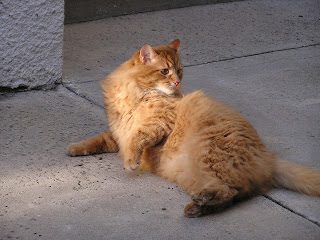 I praised their high-mindedness and read to them a passage on the spiritual effects of good music:

"Music is one of the important arts. It has a great effect upon the human spirit. Musical melodies are a certain something which prove to be accidental upon etheric vibrations, for voice is nothing but the expression of vibrations, which, reaching the tympanum, affect the nerves of hearing. Musical melodies are, therefore, those peculiar effects produced by, or from, vibration. However, they have the keenest effect upon the spirit.

In sooth, although music is a material affair, yet its tremendous effect is spiritual, and its greatest attachment is to the realm of the spirit. If a person desires to deliver a discourse, it will prove more effectual after musical melodies. The ancient Greeks, as well as Persian philosophers, were in the habit of delivering their discourses in the following manner: first, playing a few musical melodies, and when their audience attained a certain receptivity thereby they would leave their instruments at once and begin their discourse. Among the most renowned musicians of Persia was one named Barbod, who, whenever a great question had been pleaded for at the court of the King, and the Ministry had failed to persuade the King, they would at once refer the matter to Barbod, whereupon he would go with his instrument to the court and play the most appropriate and touching music, the end being at once attained, because the King was immediately affected by the touching musical melodies, certain feelings of generosity would swell up in his heart, and he would give way. You may try this: if you have a great desire and wish to attain your end, try to do so on a large audience after a great solo has been rendered, but it must be on an audience on which music is effective, for there are some people who are like stones, and music cannot affect stones.

"It was for this reason that His Holiness David sang the psalms in the Holy of Holies at Jerusalem with sweet melodies. ... In short, musical melodies form an important role in the associations, or outward and inward characteristics, or qualities of man, for it is the inspirer or motive power of both the material and spiritual susceptibilities..." Promulgation of Universal Peace

Ollie reacted to the reading this way, by reflecting on his back 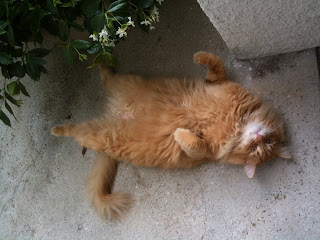 while Augustus reacted this other way...by reflecting seated in his potted tree! 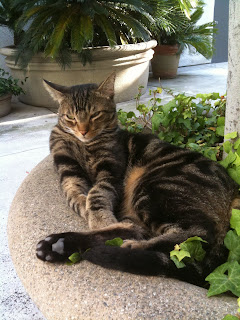 The boys listen to music everyday and just told me that they plan to sing their orders to me from now on!

Musical meows and kitty kisses to all on this gorgeous Thursday!

Ciao!
Posted by MrsLittleJeans at 12:21 PM